November 5, 2020
Share
Processing archivist, page in the reading room. Prior to relocating to Philadelphia from the Boston area, was the curator of... END_OF_DOCUMENT_TOKEN_TO_BE_REPLACED 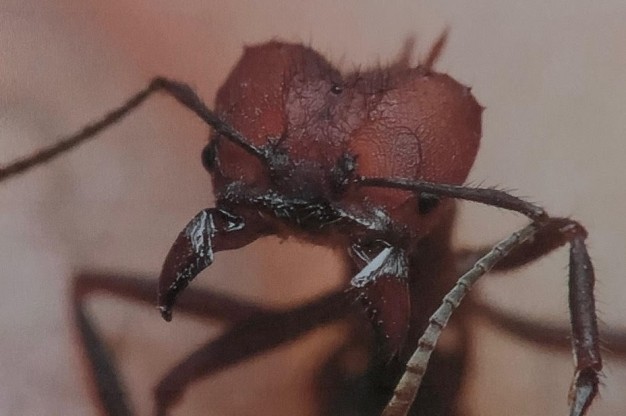 Meet Atta cephalotes, also known as a fungus culturing ant. You can find many images of her family of leaf cutters and fungus garden builders in the Neal A. Weber Papers in the APS’s Library.

These fungus gardens house the queen and her brood and are the centers of activity. First, the queen digs into the soil and ejects the contents of the infrabuccal (beneath the cheek) pocket as a pellet. This pellet initiates the first growth of the garden, which is made from fresh green leaves that worker ants cut into tiny pieces and form into a pulpy mass by pinching them with their mandibles and adding saliva.

As the cut leaf is brought back to the nest, the smallest ants in the family attach themselves to a section carried by a larger ant, and while riding the leaf, their job is to swab it clean. The nest grows over time and can consist of as many as 2,000 chambers.

Neal A.Weber (1908-2001) was a myrmecologist who traveled extensively over the world to study ant behavior. We find in his papers that ants were not all he encountered, in Cuba he found himself in the midst of the Sergeant’s Revolt led by Fulgencio Batista in 1933, and in British Guiana, now Guyana, he records this in his field notes:

“Found good collecting in the high forest. While I was intent, bent double over an old rotted log, suddenly I heard a terrific roar right back of me…I was extremely startled and jumped up with cutlass in hand and visions of a jaguar or something. The roar broke into the regular bellow of a red howler monkey. I am sure he was in a nearby tree and did this deliberately with me in mind.”

Dr. Weber’s collection includes extensive field notes, correspondence, journals, manuscripts of publications, and lantern slides that not only illustrate his scientific investigations but offer, together with his journal entries, a cultural study of multiple countries.

He is also the 1973 recipient of the APS John Lewis prize for his book, Gardening Ants, the Attines.