A Conundrum Solved With A Drawing, A Letter, and A Diary Entry

October 18, 2019
Share
Processing archivist, page in the reading room. Prior to relocating to Philadelphia from the Boston area, was the curator of... END_OF_DOCUMENT_TOKEN_TO_BE_REPLACED 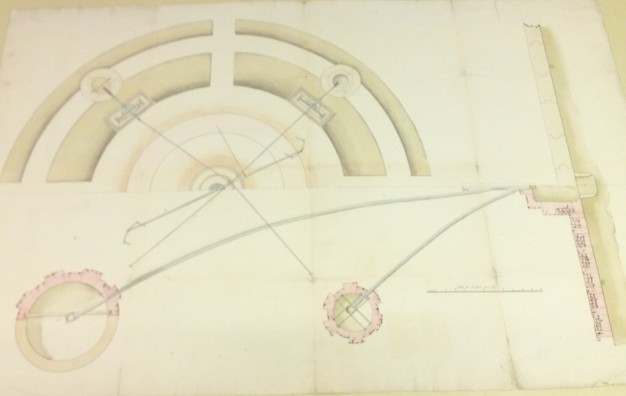 While working in the oversize collection, I came upon a drawing (pictured above) without a call number to connect it to its collection or accession record resting on a top shelf out of sight.  It is possible that it had been carefully placed there waiting for an archivist or librarian to solve the mystery of its identity and provenance.

In this case, the inscription on the back provided the first clue:

With the clue that Dr. Franklin had been given, the drawing by Henri Bertin of Chatou, I looked to see if the Benjamin Franklin miscellaneous manuscripts collection included correspondence to or from Chatou, France. The finding aid revealed that he sent a letter of gratitude to an unidentified person on July 2, 1778 for sending him “the exact Plan and Profile …of the hydraulic Machine at Chatou.”

In an effort to understand what an 18th-century hydraulic system looked like, I referred to Bernard Forest Belidor’s description in Architecture Hydraulique, 1737:

“….a horse driven machine that moved poles attached to pistons up and down through elliptical wheels. Each wheel traveled the half circumference of an ellipse, ascending and descending, and during its entire revolution, the piston lifts and distributes the water twice. Each ellipse is the union of four inclined and curvilinear planes revolving around a fixed point. The system makes pumps work to raise water from a reservoir approximately 150 feet distant.”

From Henri L. Bertin’s biography, I learned that he had been the General Controller of Finance under Louis XV and for his retirement he built an estate at Chatou, France between 1774 and 1777. The estate included a country house, nymphaeum and extensive garden to carry out agricultural experiments. For the nympaeum, Bertin commissioned architect Jacques G. Soufflot (1). The nymphaeum still stands today and is a grotto with a dome in the form of a shell resting on pillars decorated with stone and shells. Originally, the nymphaeum sheltered a nymph statue representing Madame de Pompadour, patron of Bertin and Soufflot, but it was stolen during the French Revolution. It reappeared years later and is currently housed at the Louvre.

The mystery drawing found on the shelf and Dr. Franklin’s letter in the vault were tied together with the aid of the editor’s notes in the Papers of Benjamin Franklin, (2) that referenced John Adam’s diary. The editor cited a visit to Versailles in August, but with the benefit of the drawing with notes from Franklin in hand, I looked to see if Adams recorded a visit to Chatou that same year. I found what I was looking for in his May 26, 1778 entry where he describes the hydraulic system and a visit to Bertin’s garden at Chatou with Dr. Franklin and his grandson:

“Dined at Mr. Bertins the Secretary of State at his Seat in the Country. Dr. F., his G. Son and I rode with Mm. Bertin, the Niece of the Minister …. His House and Gardens are situated upon the River Seine. He has at the end of his Garden a Collection of Rocks, drawn together at a vast Expense …. His Water Works are very curious. 4 pumps going by Means of two Horses…The Mechanism is simple and ingenious.”(3)

Perhaps the “rocks drawn together at a vast expense” described by Adams were the nymphaeum designed by Soufflot mentioned above.

With Adams’ diary entry putting Dr. Franklin at Bertin’s estate a month and a half prior to his correspondence thanking someone for the “the exact Plan and Profile …of the hydraulic Machine at Chatou”, and with the inscription on the back of the drawing indicating it is of Bertin’s hydraulic system at Chatou, I deduce that Henri Bertin sent the drawing to Dr. Franklin sometime between May 26 and July 2 1778 and was the recipient of the thank you letter from Franklin on July 2, 1778.

Notes:
1. Jacques Germain Soufflot was the architect of the Pantheon in Paris, and he and Henri Bertin were friends.
2. Papers of Benjamin Frankliln, Volume 27, page 19, Yale University Press.
3 .The Adams Papers, Series I Diaries, 1771-1781, pages 314-315, L.H. Butterfield.Diary