March 11, 2021
Share
Marian L. Christ is Assistant Librarian and Head Cataloger/Bibliographer. She received her MLS from Drexel University and BA from Beaver... END_OF_DOCUMENT_TOKEN_TO_BE_REPLACED 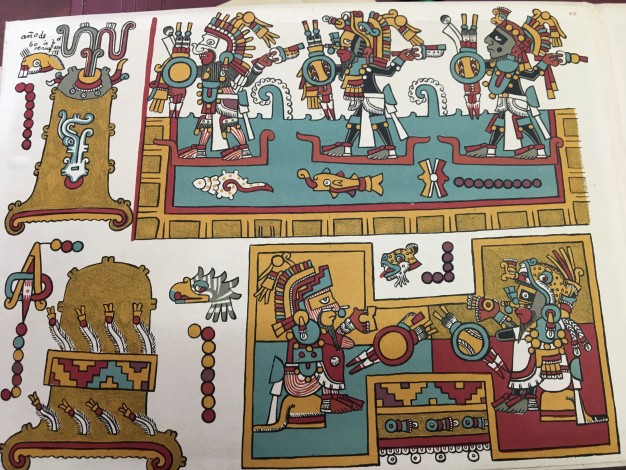 Image: Page 80 of the Codex, showing a group of three chieftains in boats in the top illustration; below, two of the three seated and exchanging gifts. APS.

One of the more beautiful books in the holdings of the American Philosophical Society Library is a collection of Mexican pictographs, published in Cambridge, Massachusetts in 1902 (497.4 C64n). The pictographs are mounted on board, connected to form a continuous strip, and folded into 42 leaves with colored illustration. The first and last leaves are attached to parchment covers. A 55 page text accompanies the pictographs. The preliminary pages of the text contain the note: “As an acknowledgment of Mrs. Zelia Nuttall’s indefatigable researches, one of the results of which has been the discovery of the long lost manuscript here published in facsimile, and in recognition of her high attainments in Mexican archaeology, the Peabody Museum of American Archaeology and Ethnology has given to this ancient Mexican book the name of Codex Nuttall … F.W. Putnam, Curator of the Museum.”

Zelia Maria Magdalena Nuttall (1857-1933), noted for her work in the field of New World and early Mexican civilization, was the seventh woman and the first anthropologist elected to the APS in 1895—eight years before Franz Boas, “The Father of American Anthropology.” She was born the second of six children to an Irish father, Dr. Robert Kennedy Nuttall, and Mexican-American mother, Magdalina Parrott. Dr. Nuttall practiced medicine in San Francisco until 1865, when, in hopes of improving his own health, he took his family to Europe and remained there until 1876. They lived in several countries during their stay in Europe, enabling Zelia to learn several languages from her tutors. Nuttall, whose only formal education consisted of two semesters at the Bedford College of Women in London when she was fifteen, profited from her impressive, if informal, continental education which allowed her to speak and publish in four languages throughout her career. She had scarcely any scientific training, but after 1880 she gained some field experience when she married, and subsequently traveled with, the French ethnologist Alphonse Louis Pinart. The marriage was unhappy and they separated after only four years. Four years after that, in 1888, they divorced, and the decree gave Zelia the custody of their only child and the right to resume her maiden name. It was after the divorce, during a stay at her mother’s birthplace in Mexico, that she developed a fascination with Mexican history and archaeology, which lasted for the rest of her life.

Her early publications in Mexican ethnohistory so impressed the curator of the Peabody Museum at Harvard that he named her an assistant in Mexican archaeology, a post she held for forty-seven years. Nuttall discovered more than one rare manuscript and excelled at searching out beautiful examples of Mexican pictography. Nuttall prepared this codex, which she called “the most superb example of an Ancient Mexican historical manuscript I had ever seen,” for publication by detailing its historical context and translating its meaning with the cooperation of its owner, Lord Zouche of Harynworth, and with funds from Charles P. Bowditch, a faculty member of the Peabody Museum. Nuttall suggested that ancient Mexican readers of the codex recited the history of the native heroes whose deeds are pictured; she explained that any accompanying hieroglyphs recorded only the names of people and places to preserve them and fix them in the memories of native bards.

In addition to her forty-seven year tenure at the Peabody Museum at Cambridge, and twenty-five years as Honorary Professor of Archaeology at the National Museum of Mexico, she was a member of the Advisory Council of the Department of Anthropology at the University of California. She was a Fellow of the American Anthropological Association, the American Ethnological Society, the American Geographical Society, the American Association for the Advancement of Science, the Hispanic Society of America, the Royal Anthropological Institute and the California Academy of Sciences, to name only a few of her associations. She also was a corresponding member of foreign societies in Paris, Geneva, London, Rome, Stockholm and Lima.