Bringing Opera to the Masses: William Parker Foulke and the Academy of Music

September 12, 2019
Share
Bayard Miller has a Master of Art in Public History from Temple University. He is active in Archives Month Philly... END_OF_DOCUMENT_TOKEN_TO_BE_REPLACED 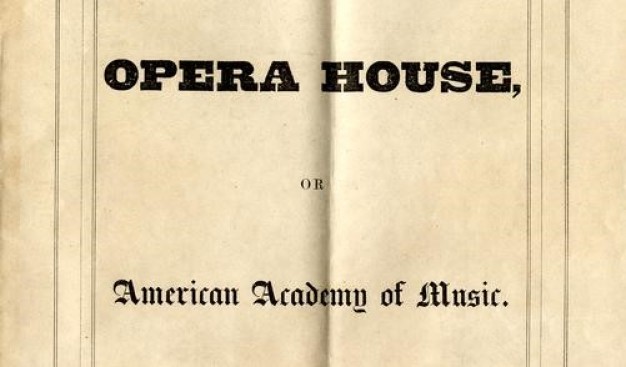 The recently digitized William Parker Foulke papers are a rich resource for many areas of scholarly and public engagement. Foulke, a trained attorney and active member of Philadelphia’s 19th-century elite, spent much of his life engaging his interest in natural history, geology, history, and a wide array of civic and philanthropic causes. Some of his better known work was with the Eastern State Penitentiary, the American Colonization Society, and of course his discovery in 1858 of the first dinosaur found in America, aptly named Hadrosaurus foulkii. The diversity of his work did not stop there. As a well-to-do man of the mid-19th century, he was, of course, also a patron of the arts. Foulke saw the arts as a way to draw people to the city he loved and, perhaps more importantly,  to engage and influence the denizens of the burgeoning metropolis. It’s no surprise then, that found in his papers are correspondence, notes, memoranda, and newspaper articles regarding his quest to raise funding to build a world-class opera house right here in Philadelphia.

The Academy of Music, the oldest opera house in the United States still hosting performances, has hosted operas and composers on the corner of Broad and Locust Streets since 1857. But it wouldn’t have been built without the tireless devotion of philanthropic Philadelphians, like Foulke. While a thriving opera scene did exist in mid-19th century Philadelphia, Foulke saw it as exclusionary and unsustainable. His analysis of two rival opera houses showed that, while there certainly existed a passion for opera in Philadelphia, this passion was being “indulged without much reference to personal expense or comfort.” Exorbitant ticket prices and a lack of adequate seating excluded thousands of residents and visitors seeking “the enjoyment of an entertainment which ought to be made properly accessible to all.”

Foulke believed in the universality of music and considered opera “a source of exquisite enjoyment...calculated not only to the interest of the mind, but to gratify the ear, to rouse the feelings, and to touch the heart.” He argued that if a theatre were built that was accessible, both spatially and monetarily, to all, it would be a very prosperous venture for the city on account of its moral influence (educating and cultivating the tastes of the masses), cultural influence (making Philadelphia a center for the arts), and commercial influence (bringing business to Philadelphia).

Of course funding a financially accessible opera house was no easy feat. To keep the overhead, as well as the price of admission, low, Foulke devised a plan to create a Philadelphia-based network of performers and musicians. Essentially, Foulke’s plan would see artists become permanent residents of the city with financial backing from the Academy. According to Foulke, this would prevent the Academy from falling prey to “foreign managers’ of troupes and traveling shows, whose expenses would necessarily raise the price of tickets, thus excluding large swaths of the growing population of Philadelphia,” a public that the financial future of the Academy relied on. His argument was persuasive enough that the original Charter included a clause that provided for the “establishment of a School of Vocal and Instrumental Music, and for the organization of a corps of competent professors.” Sadly, however, this idea was overturned and Foulke’s dream of a “music house for the people at large” wasn’t immediately realized. It seems, however, that Foulke was on to something, if not a little ahead of his time, as Philadelphia is now home to world renowned schools of vocal arts and instrumental music.

To learn more about William Parker Foulke and his work with the Academy of Music visit his collection in the APS Digital Library.