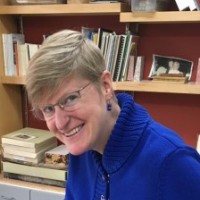 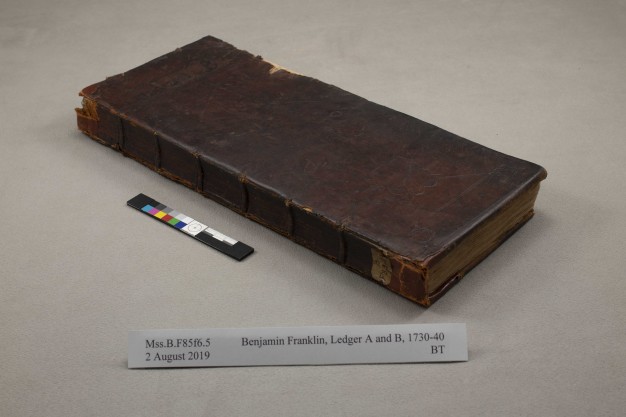 I met one of my favorite collection items at the APS on the day I interviewed for my job as assistant conservator. Patrick Spero, the APS Librarian, handed me a tall, narrow book bound in dark leather. “This is the earliest surviving ledger belonging to Benjamin Franklin,” he said. “What do you think about it?”

I examined it carefully. The spine of the book was separating from the rest of the book, and the front and back covers were tenuously attached. The ends of the spine had previously been repaired with red-brown leather that was now weak and powdery. A slip adhered inside the back cover of the book stated that this had been done in 1938, probably (as I now know) by Carolyn Horton, a pioneer of early book conservation.

As I flipped through the book, I noticed other signs of its age. It had been kept from 1730 to 1740 by Ben Franklin and his wife, Deborah, and its handmade rag paper showed the usual discoloration of 285-year-old paper. The book’s leaves had a few splits and tears. In any book, the edges of the leaves are exposed to more oxygen than the middles of the pages, thereby becoming more oxidized, brittle, and vulnerable to damage.

Like other writers of their time, the Franklins also wrote in iron gall ink, a black ink whose color comes from a mixture of ferrous sulfate (an iron compound) and the gallic acids found in oak galls (growths formed on oak twigs when a wasp lays its eggs under the bark). Because these ingredients form sulfuric acid when they are mixed together, this ink is very acidic. Over time, its acids attack paper by breaking the cellulose chains that make it up at the molecular level. Excess iron in the ink can also catalyze oxidation reactions that rust or burn the paper, making it brown, brittle, and prone to breakage.

I discovered my favorite part of the ledger when I turned to one of the pages at the very back of the book. Here, Franklin had recorded the results of six iron gall ink recipes, including “Benj. Franklin’s Ink” from June 17, 1731, “Joseph Breitnall’s Ink” and “Ink of a Very Different Sort” from the same date. (Oh, how I wish I knew what made the different ink different!) “Persian Ink made by James Austin” was “stir’d up June 19, 1731.” The “Japan Ink written June 22, 1731” was likely made from a commercial ink powder that could be mixed with water, and it has aged the most poorly, with brown haloes around the inked lines. “B. Franklin’s New Ink,” “written Aug. 3, 1731” and noted to be “pale when first wrote” has probably aged the best.

I don’t know why Franklin recorded his inks in this way. Was he looking for a long-lasting, chemically stable ink, or just for an ink that gave him the best color? Clearly, he was a man who loved experimentation. Whatever his reasons, as a conservator who often treats the problems associated with iron gall ink (including discolored and cracked paper), I loved finding this series of inscriptions.

After I had exclaimed enthusiastically about my find for a while, Patrick asked me about the book as a whole. I explained the physical problems I had identified, and he asked me if I could fix them. I said I could. About three years later, I got my chance. But that’s matter for another blog post.