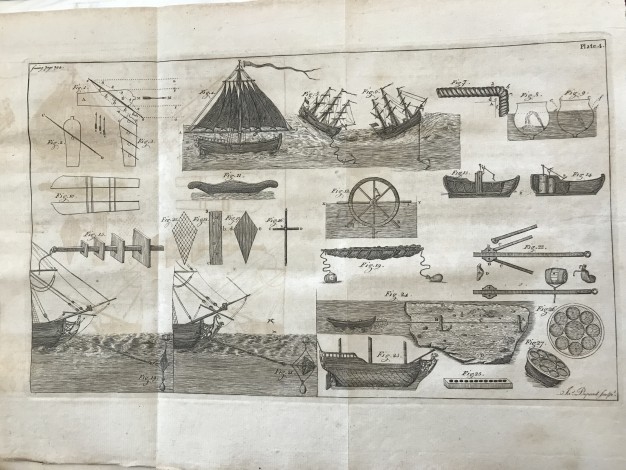 Benjamin Franklin’s intellect swept him up in the tides of scientific knowledge of the 18th century. While many know him for his electricity experiments, his maritime pursuits are often drowned out. He developed an interest in the mysteries of the sea at an early age. Born in the port city of Boston, he grew up hearing tales from his eldest brother Josiah about the spice trade in the East Indies. His mother’s family, the Folgers, were whalers living on the island of Nantucket. Growing up with seafaring relatives allowed Franklin to access valuable sailor knowledge.

This interest in the ocean stayed with him throughout his entire lifetime. The start of his own marine experimentation can be seen in his first transatlantic trip in 1726, as he sailed back to America from England. He observed signs that they were nearing the coast, such as his to ability collect gulf weed from the water and the lighter water color. Yet six days later, he observed that the water had returned back to its original dark color. Little did Franklin know he had passed through the Gulf Stream, an oceanic current that he would spend the rest of his life studying. Sixty years later, on his last transatlantic trip coming back from France in 1785, we see Franklin still testing the parameters of the Gulf Stream. Except now, he knew exactly what the Gulf Stream was. Franklin had worked with his cousin Timothy Folger, a whaling captain, to put together a map of the Gulf Stream in 1769/1770. This is just one example of Franklin’s maritime experiments that shows that Franklin spent his entire life expanding knowledge of the sea.

One can see the culmination of his thoughts and interests while at sea in his 1786 letter to Alphonsus le Roy. It was published in the American Philosophical Society’s Transactions, volume 2, concerning “Sundry Maritime Observations.” This essay discussed methods by which Franklin thought the lives of sailors and passengers could be improved. The advice addresses many of the common problems that happen at sea. Franklin had often witnessed the terrible conditions as a passenger and sought out solutions. The letter provides the reader with diagrams of Franklin’s innovative concepts so that the reader has models to follow. The inspiration for some of these innovations, however, rose from beyond Franklin’s own experiences. The writings of other scientists at sea also informed Franklin’s approach to boating technology. Franklin’s ideas reached further than traditional European boating technology. The diagram we see from “Maritime Observations” shows Franklin referencing boating techniques from other cultures, those of China, India, and Native America.

Halfway through “Maritime Observations” Franklin references boating technology from other cultures such as in Figures 8 and 9, which depict ships in the process of sinking. The focus of these two illustrations is how to stop a ship from completely sinking when it has sprung a leak out at sea. While the diagraming how to pump water from the ship, Franklin reflects on how Chinese sailors solved this problem. Within the typical European model of a packet ship, there is only one compartment. In a typical Chinese ship, there are multiple compartments. This traps all the flooded water inside a single compartment and prevents the entire ship from flooding, allowing the crew to make it back to shore.

In Figure 10, Franklin implements his altered version of the double hulled boat with credit given to William Petty. Petty, a man of science from the 17th century, took his version of the double hulled boat from the Catamarans of the Tamil Nandu coast, located on the southeastern coast of the Indian subcontinent. Compared to the European model, this system of boat had two hulls, the portion of the boat that sits on the water, rather than one. That meant there was no need for ballast, or heavy material placed in the hull, in order to improve stability. This allowed the ship to either sail faster or to carry more goods.

Finally, Figure 11 is a model of a canoe that Franklin credits to Native Americans. The benefit of this canoe is that it is light, yet sturdy, able to transfer a dozen people across the water but only requiring two to carry it. Franklin notes that there is a hump centered on each side of the canoe. This design prevents the canoe from taking on water when the boat leans or tips from the force of the wind on its sails.

“Maritime Observations” provides evidence that Franklin’s ideas did not just exist within a Eurocentric theoretical bubble that we would imagine from intellectuals at this time. Rather, Franklin and other scientists relied heavily on the personal testament and knowledge of sailor practices in order to perform marine science. Having access to sailor knowledge meant also having access to the knowledge of other cultures encountered by sailors, which in turn is why Franklin had access to boat technology from other cultures for this publication.