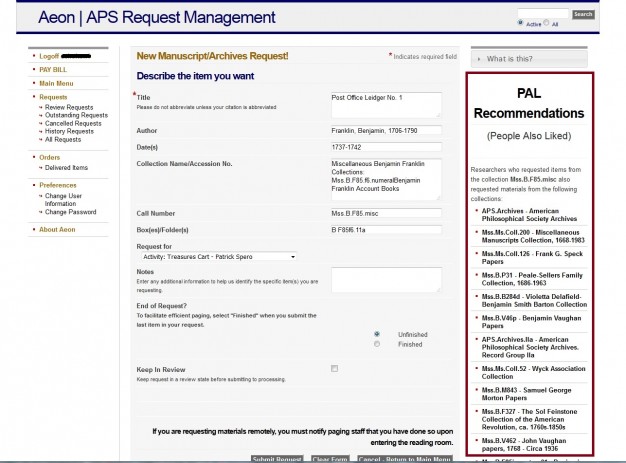 The American Philosophical Society is pleased to announce the launch of PAL (People Also Liked), a circulation data-driven recommendation tool designed specifically for archives and manuscript repositories. Similar to the customer recommendation tools used by major online commerce sites, like Amazon and Netflix, PAL helps scholars discover relevant manuscript collections based on request history and user interests. Researchers at the APS use it to sift through the 13 million pages of manuscripts held at the APS Library, including the papers of Benjamin Franklin, the journals of Lewis and Clark, and the papers of seven Nobel Laureates.

“We had compiled a lot of user data that we weren’t really using. We realized that new technology could harness this data and improve a fundamental job of librarianship: helping people find what they need,” Patrick Spero, APS Librarian, said.

The tool was developed by Scott Ziegler, Head of Technology at the Library, and Richard Shrake, a consulting software developer who specializes in library science. Designed to interact with the APS’s circulation system, AEON, PAL captures data, anonymizes it, categorizes it, and then matches past user behavior with the needs of new researchers.

“Unlike recommendation tools for books or movies, archival collections don’t have a simple one-to-one relation,” said Ziegler. “That is, a Benjamin Franklin letter, for example, doesn’t have a unique identifier. In contrast, a book has an ISBN number, a number that uniquely identifies it. In the world of archives and special collections, we always need to maintain the context of any single letter. The trick is to also generate recommendations for collections similar to one that contains the letter in question. This is what makes PAL distinctive. It’s the first tool that we know of to do this.”

After months of developing and testing, the Library launched PAL in January 2017. Ziegler and Shrake presented the tool at Code4Lib National Conference in Los Angeles in March and are forming partnerships with other libraries to enhance the system.

“We’ve heard from a number of libraries interested in PAL and how they can use it for their collections. We hope to continue to find colleagues who are willing to help us generalize the tool for wide use,” said Ziegler.