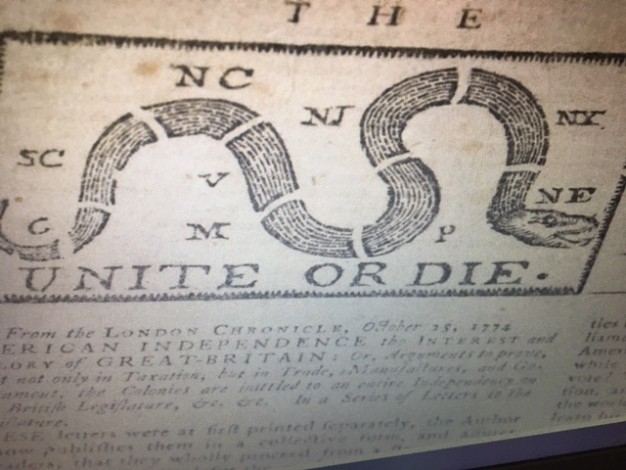 When a December 28, 1774, issue of the Pennsylvania Journal and Weekly Advertiser featuring Benjamin Franklin’s iconic “Unite or Die” political cartoon surfaced at a southern New Jersey Goodwill processing center this past October, many wondered where the document would end up. Now, the American Philosophical Society (APS) in Philadelphia, founded by Benjamin Franklin in 1743, is pleased to announce that it will be the new home of the newspaper, where it will be available to scholars of this pivotal point in American history.

The framed newspaper was dropped off at a Woodbury, New Jersey collection point but was routed to a Goodwill office where potentially-valuable items are sorted and listed for sale online. Goodwill employee Don Walsh-Charlesworth noticed the paper and thought it looked like an authentic colonial newspaper, which an auction house confirmed.

The “Join or Die” segmented snake was the first American political cartoon, originally designed by Franklin in 1754 to urge colonists to unite against the French and Native Americans in the French and Indian War. By the time of this paper’s printing in December 1774, the cartoon’s caption had changed to “Unite or Die,” advocating the colonists band together against the British. The issue is the last one of 1774, and builds on the Society’s previous holdings of the Pennsylvania Journal, including an extremely rare complete run of the newspaper from 1775–1776. “The APS’ print holdings in the Revolutionary period are exceptionally strong,” said David Gary, Curator of Printed Materials at the American Philosophical Society. “This issue, with four printed items from John Hancock, is an important addition to the collections.”

The printing of this newspaper came two months after the conclusion of the First Continental Congress, which was assembled to respond to the British blockade of Boston and the Intolerable Acts. Delegates of the Congress signed a resolution to boycott British goods beginning in December 1774. Many colonists were undecided about whether to join the patriots in resistance against the crown, but the Revolution was just months away with the first shots fired at Lexington and Concord in April 1775.

“This newspaper captures a key part of the story of the Revolution and creation of a nation. Aside from its iconic imagery, the issue is filled with important articles calling for the colonies to unite in resistance to the Crown. Scholars, teachers, and students will be able to use this material in a variety of exciting ways. We are honored to be the future stewards of it and look forward to making it available for researchers, ” said Patrick Spero, Librarian of the American Philosophical Society.

On January 18, 2019, representatives from Goodwill Industries will transfer the newspaper to the APS at a Benjamin Franklin birthday celebration at the Society. Each year, the celebration highlights a theme connected to Franklin’s social causes and recognizes an individual who has excelled in the selected field. The 2019 theme is criminal justice reform and the Franklin Founder Award will go to Bill Keller, editor-in-chief of the Marshall Project. A panel on criminal justice reform will take place in Benjamin Franklin Hall (427 Chestnut Street, Philadelphia, PA, 19106) from 9:00 to 11:00 a.m., after which the newspaper will transferred to the APS. This event is open to the public.

“We are pleased to present this very rare find to the American Philosophical Society,” said Goodwill President & CEO Mark B. Boyd.  “Our goal since uncovering this 1774 Rebel newspaper at Goodwill’s Woodbury Heights, NJ donation center was to find a home for it where the public can use it as yet another mechanism for tracing American history.  I can think of no better place for it than the Library’s fine collection of archives.”

The American Philosophical Society, the oldest scholarly society in the United States, was founded in 1743 by Benjamin Franklin for the purpose of “promoting useful knowledge.” In the 21st century the APS honors and engages distinguished scientists, humanists, social scientists, and leaders in civic and cultural affairs through elected membership and opportunities for interdisciplinary, intellectual fellowship, particularly in the semiannual Meetings in Philadelphia. It supports research and discovery through grants and fellowships, lectures, publications, prizes, exhibitions, and public education. The APS serves scholars through a research library of 13 million manuscripts and other collections internationally recognized for their enduring historic value.