June 26, 2018
Share
Will Fenton was the 2017–2018 Elizabeth R. Moran Fellow and recently completed his Ph.D. at Fordham University where he specialized... END_OF_DOCUMENT_TOKEN_TO_BE_REPLACED 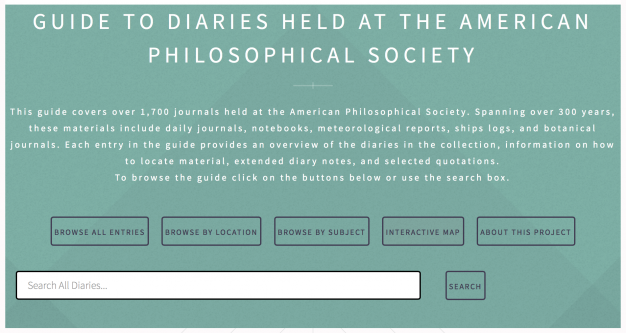 I am delighted to announce the public availability of the Diary Research Guide. This guide reflects my 11 months of research into the manuscript collections at the American Philosophical Society as the Elizabeth R. Moran Fellow (2017-18). All totaled, I examined 1,729 volumes across 115 manuscript collections spanning 340 years (1671-2011). Alongside descriptions of diaries contained in collections, the guide features more 400 new subject headings, 1,175 unique locations, and dozens of transcriptions.

Searching across this guide underscores the strength and diversity of the APS manuscript collections. At the top of any researchers list ought to be the institution’s prodigious family papers. For example, the Smith-Houston-Morris-Ogden family papers contain at least 179 volumes spanning multiple generations of multiple families. With volumes ranging from 1671-2011, the American Philosophical Society has diaries that predate the colony of Pennsylvania and postdate the 2008 economic crisis. Although APS is well-known for its early American history and history of science holdings, diaries underscore specific areas of strength.

I have modeled my approach to this guide on two existing, but equally formidable, antecedents: the Early American History Guide and the Indigenous Subject Guide.

I have used subject headings—415 and counting—as keywords for both identifying resources and for making connections between collections. For example, the “American Philosophical Society” subject heading surfaces 19 disparate collections. Included in those results are the journals of William Billings, John Louis Haney, and John Clark Slater. That a 19th-century ship captain, an early 20th-century English professor, and a 20th-century physicist each passed through the APS attests to the diversity of useful knowledge.

Similar to the EAH guide, Abstracts provide an overview of materials contained in each collection—and the researchers for whom they might prove most enticing.

Where this guide departs from its predecessors is in its level of detail. I include Extended Abstracts for about 40% of the collections surveyed (47). Relatedly, more than half of the collections (61) include Selected Quotations, intended to provide a sense of the content and texture of diary entries.

Finally, the diary research guide leverages the mapping feature developed for the Indigenous Subject Guide. Although diaries are concentrated in and around Philadelphia, diarists travel widely. Nearly two-thirds of the diaries in the collections (73), are partially- or fully-devoted to travel. I have captured a representative, but by no means comprehensive, sample of those travels (1,175 locations). My hope is that this location data will enable scholars to draw new connections across the collection.