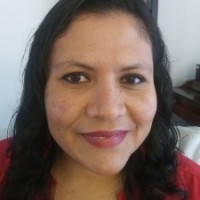 Ruth H. Matamoros Mercado is a Miskitu Indigenous Lawyer, researcher and activist for the right to self-determination of Moskitia. She graduated from the National Autonomous University of Nicaragua UNAN-León with a law degree. She received master's degree and is currently a doctoral candidate at the Lozano Long Institute of Latin American Studies at the University of Texas at Austin. Her work focuses on the promotion of the rights of Indigenous Peoples, particularly those related to access to land. From an indigenous research and methodological perspective, her areas of research include decolonial indigenous and feminist geographies, Traditional Ecological Knowledge (TEK) and Political Ecology. Her doctoral research project examines the notion of the Miskitu people in relation to land and territory in contexts of colonial subordination. In 2014 she was part of the interdisciplinary working team that proposed pluractionality for the peoples of Moskitia as part of the constitutional reforms implemented by the Nicaraguan parliament that year. She has shared her work in important academic spaces including the Maori Indigenous Peoples in Aotearoa, New Zealand, the Mapuches in Wallmapu, Chile and other indigenous geographies in resistance.