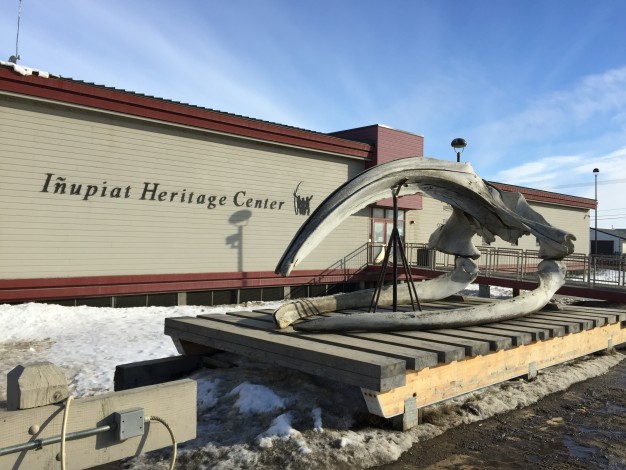 With generous support from the American Philosophical Society Digital Knowledge Sharing (DKS) Fellowship, I participated in the inaugural DKS workshop hosted at the APS Library in autumn 2017 and I was fortunate to travel to Utqiaġvik, Alaska, the northernmost Iñupiat town. I am a recent History PhD graduate from Yale University and I am also Iñupiaq. My family comes from Unalakleet, which is the southernmost Iñupiat village in Alaska. I had never been to Utqiaġvik (which people sometimes call by its English name “Barrow”) and I appreciated the opportunity to research at the Iñupiat Heritage Center and Ilisaġvik Tribal College’s Tuzzy Consortium Library. In addition to visiting these two premier Alaskan research facilities on Iñupiat history, I cherished the opportunity to interview the last two Iñupiat WWII veterans in Utqiaġvik at the Tuzzy Consortium Library. My dissertation and future manuscript relates to WWII Alaska Native history and the colonial/Indigenized relationship between the United States military and Alaska Native people. I have spent time researching at archives, tribal archives, and conducting over 75 elder oral histories.

For generations since WWII, many Alaska Native people have enlisted and served in the Armed Forces. According to oral histories, military service has been akin to service to the Indigenous community. Concluding research travels to Utqiaġvik, all interview materials and photographs from Utqiaġvik have been mailed to each elder, and the materials are also preserved at the Iñupiat Heritage Center, Ilisaġvik Tribal College’s Tuzzy Consortium Library, and the American Philosophical Society Library which is working on an amazing effort to digitize collections. The Iñupiat Heritage Center and Tuzzy Consortium Library are also working to digitize their collections on North Slope Iñupiat history.