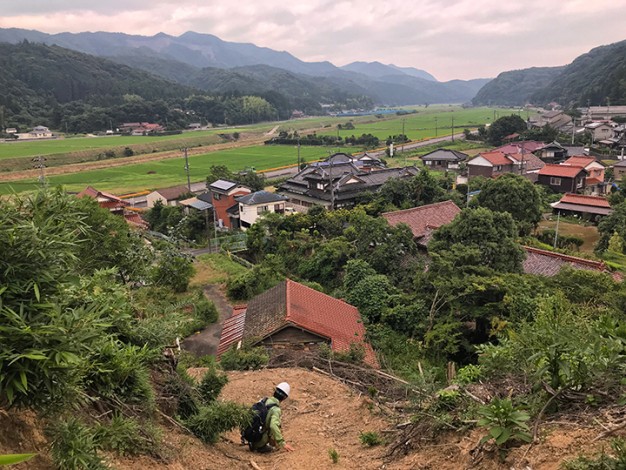 In southwestern Japan—far from the bright lights and busy streets of Tokyo and Osaka—lies the small, sleepy town of Toyota. Although the lushly forested mountains surrounding Toyota are peacefully buzzing with the distinctly Japanese summer chorus of cicadas today, the rocks that form the town’s foundation document a nearly 200 million-year-old story of a global environmental crisis.

These rocks—known to geologists as the Nishinakayama Formation—comprise dark, organic-rich sediments which were deposited on a shallow ocean shelf during the Toarcian Age of the Jurassic Period—approximately 183 million years ago. During this time, the world’s oceans suffered a major extinction which was associated with fluctuating sea levels, an ocean anoxic event (OAE; a temporary period in Earth history during which low-oxygen conditions persisted in the oceans), and drastic changes in global atmospheric carbon dioxide (CO2) levels—all of which were likely triggered by widespread volcanic activity in the southern hemisphere.

Meanwhile, the supercontinent Pangea was breaking apart. Southern continents rifted and volcanic activity poured millions of cubic kilometers of lava onto what is now Antarctica, Africa, and South America to form the Karoo-Ferrar Large Igneous Province. This volcanic activity caused a temporary disturbance of the global carbon cycle by decreasing the relative abundance of the heavy stable isotope of carbon 13C compared to the light (and most abundant) stable isotope 12C. This short-term negative shift of 13C/12C is called a negative carbon isotope excursion (CIE). Negative CIEs are therefore useful proxies for recognizing environmental change triggered by volcanism. A CIE can be recognized in the rock record by taking samples from each layer, grinding the rock into powder, and using an instrument called a mass spectrometer to measure the ratio of 13C/12C in the organic matter of each sample. This method is called carbon isotope stratigraphy, and it is used by geologists like me both to correlate layers of rock regionally and globally and to interpret environmental change in deep time.

I became interested in the Nishinakayama Formation because I study how environmental change and extinction events during the early Jurassic Period affected the evolution of reptiles. This interval of time is well-known for the global dominance of dinosaurs, but it is also characterized by the diversification of the familiar reptile groups of today—such as crocodiles, turtles, and lizards. Some fossil reptile skeletons have been discovered in the Nishinakayama Formation along the Era River south of Toyota; however, these fossils were discovered as loose slabs that had been transported downstream by the river, so their exact geologic context—including their relationship to the Toarcian OAE—has remained uncertain.

As an American Philosophical Society Lewis and Clark Field Scholar, I traveled to Japan in July 2018 to establish the carbon isotope stratigraphy of the Nishinakayama Formation in the Era River region. In 2012, my collaborator Kentaro Izumi of Chiba University and his colleagues identified evidence of the CIE and Toarcian OAE—including a turnover in the species of ammonite fossils present throughout the formation—in East Asia for the first time in an area called Sakuraguchi-dani, approximately 1 km south of the Era River. The onset of the Toarcian OAE has not yet been recognized in the Era River outcrop, and the physical characteristics of the Nishinakayama Formation vary between the Sakuraguchi-dani and Era River outcrops, so finding the CIE in both areas is the best way to correlate them.

By identifying the layer preserving the Toarcian OAE negative CIE in the Era River outcrop—and using the geochemical characteristics of the rock surrounding the fossil reptiles to recognize the horizon from which they originated—I hope to better understand the geologic and paleoenvironmental context of the fossils. These data will allow me to test whether the fossiliferous horizon of the Nishinakayama Formation in the Era River Valley lies above the T-OAE negative CIE, and—in turn—whether the Nishinakayama Formation fossil reptiles differ from pre-Toarcian reptile fossils found in Asia and globally. This would provide evidence for extinction and turnover at the T-OAE in terrestrial fossil reptiles.