November 6, 2018
Share
Processing archivist, page in the reading room. Prior to relocating to Philadelphia from the Boston area, was the curator of... END_OF_DOCUMENT_TOKEN_TO_BE_REPLACED 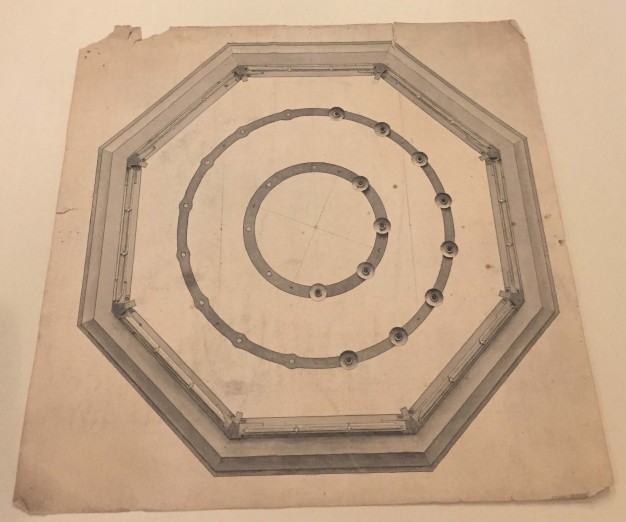 In the process of bringing new order to the oversize collection, I have come across drawings that were separated from their collections over the centuries. On one occasion, I found the above image, which looked like an 18th-century drawing of a fancy French irrigation system titled: “Architectural element? Unidentified.”

Working with a call number written on the folder, I consulted the online catalog to no avail. Next, I turned to the trusty old card catalog and found “John Smeaton’s Plan of a Lighthouse” under this call number that led me to an exquisite drawing of a lantern. In addition, the card pointed me to Benjamin Franklin’s account book, number 7, (1757-1776) and the 1787 American Philosophical Society minutes.

In his account book, Benjamin Franklin noted that he sent the plan to David Rittenhouse on October 21, 1776 and the 1787 minutes indicated Franklin donated John Smeaton’s plan to the APS on December 7, 1787. These were solid clues, but I couldn’t be sure that the call number on the folder coincided with the drawing inside. In an effort to be certain that the “unidentified architectural element” belonged with the drawing of the lantern, I wondered if the drawings had been published since they were meticulously drawn. Consulting the online catalog for print material, I found that the 1813 second edition of A Narrative of the Building and Description of the Construction of the Edystone Lighthouse by John Smeaton (1724-1792) was resting on a shelf in the basement of the Library. Aha! Plate No.12 displayed engravings by Edward Rooker, titled “An enlarged horizontal and vertical section of the Edystone Lantern with the chandeliers”, that were identical to the original drawings in my hands.

Evidently, the “Architectural element? Unidentified” was the detail of the chandelier for the lantern of the lighthouse. John Smeaton, inspired by the shape of an oak tree, designed the third Edystone Lighthouse at Plymouth, England with a large heavy base and a curved tapering pillar above to keep the center of gravity low. The lighthouse was 72 feet high, with a diameter of 26 feet at the base and 17 feet at the top. Twenty-four candles lit the house on October 16, 1759, with each candle weighing between two and five pounds. A timepiece placed alongside the light was set to chime every half-hour, alerting the lighthouse keeper to the need to replace expired candles.

With the help of staff, catalogs, manuscripts, and print material I was able to identify and return an original drawing completed in England prior to 1763 to its proper place.  Given to Benjamin Franklin and then by him to the APS, I am happy to report that the lantern and the chandelier are back together.