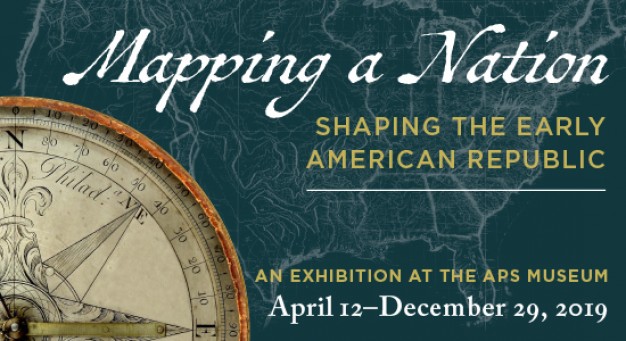 Why would a government publish a map claiming land they do not control? Why would the citizens of a young nation—still recovering from a war for independence—care about making maps? Opening April 12, 2019, the new exhibition from the American Philosophical Society Museum, Mapping a Nation: Shaping the Early American Republic, traces the creation and uses of maps from the mid-18th century through 1816 to investigate maps’ political and social meanings.

The exhibition draws on the APS Museum and Library’s extensive holdings and will feature significant Early American maps, the tools that were used to create them, and historical artifacts that represent the figures responsible for negotiating the landscape of the early United States. Visitors can see the only known document signed by the first four presidents of the United States—the 1793 subscription list for the botanist André Michaux’s proposed western expedition—journals and maps from the Lewis and Clark expedition, and the surveying tools David Rittenhouse used to extend the Mason-Dixon Line.

“Early American maps were practical tools that defined physical and political borders,” said APS Museum Director Merrill Mason, “but many of the maps we have on display were also works of art and feats of printing technology.”

Objects like Englishman John Mitchell’s 1757 Map of the British and French dominions in North America illustrate how colonial powers used maps to overstate their claims to North America, extending the boundaries of British colonies into regions that the French and Native Americans still controlled. Creating that map and others relied on the work of surveyors, geographers, astronomers, naturalists, instrument makers, and colonial and Native American informants, and maps were used to convey all kinds of useful knowledge. Later, when American colonists declared independence, British officials used the Mitchell map to negotiate new boundaries.

After the American Revolution, mapmakers shaped national identity by defining the borders of the newly united states. On display will be a previously un-exhibited collection of manuscript hand drawn maps used to create the first atlas of the United States, including the map created during Tennessee’s campaign for statehood, and George Washington’s 1792 copy of the plan for the city of Washington, D.C. Mapmakers during this period believed they were not only illustrating the nation’s geography, but shaping the character of its citizens.

As the United States entered the 19th century, westward expansion became one of the federal government’s priorities. Maps from the early national period show the nation’s growing infrastructure and expeditions across the continent. Postal routes and road systems soon stretched into the frontier, encouraging settlement by white Americans, many of whom envisioned the expansion of slavery, and obscuring the presence of Native Americans.