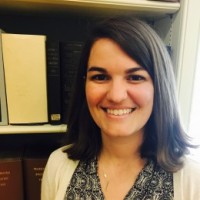 In 2018, the APS Museum is celebrating the Society’s 275th anniversary with a new exhibition, In Franklin’s Footsteps: 275 Years at the American Philosophical Society. Since 1743, APS Members have followed Benjamin Franklin’s mission to promote useful knowledge, changing the world we live in through important advancements in science, technology, and the humanities. Visitors can learn about these extraordinary Members through the Society’s important library and museum collections, including treasures like David Rittenhouse’s telescope, one of Lewis and Clark’s journals, and photographs from the first manned lunar landing.

This exhibition provided us with an opportunity to research many APS Members from a variety of time periods and disciplines. One of our favorite Members to learn about was Mildred Cohn. Cohn was a biochemist whose work with nuclear magnetic resonance (NMR) laid the groundwork for magnetic resonance imaging (MRI) technology. She was a brilliant, curious, determined, fun-loving individual, whose exciting life and work captivated us from the start. We wanted to highlight Cohn in this exhibition to honor her scientific accomplishments and to inspire young women today to pursue careers in the sciences and other traditionally male-dominated fields.

As a Jewish woman in the 1930s, Mildred Cohn met with many obstacles to pursuing a postsecondary education and career in the sciences. Nevertheless, she persisted. In 1932, Cohn was the only woman on a 70-person team working to develop fuel-injection airplane engines at the National Advisory Committee for Aeronautics (NACA, which later became NASA). When the director realized Cohn was working in the lab, he forbade women from working alongside the men there, on the grounds that they would be a distraction. Instead of accepting his decision, Cohn convinced her supervisor to let her design experiments outside the lab for male chemists to perform in her place. Later, she wrote in her memoir that she “couldn’t believe her own chutzpah” in standing up to her boss. Cohn left NACA soon after to attend Columbia University, where she received her Ph.D. in physical chemistry in 1938. For the exhibition, we drew upon the APS Library’s Mildred Cohn Papers and featured photographs of experiments she designed and worked on.

After the exhibition opened, we also had the amazing opportunity to meet with some of Cohn’s relatives. When they heard that she would be featured in the exhibition, Cohn’s daughter, son-in-law, cousin, and granddaughter visited the museum and shared some wonderful stories and memories with us. Perhaps not surprisingly, Cohn’s daughter and granddaughter both got Mildred Cohn in our “Which APS Member are You?” quiz.

In Franklin’s Footsteps is open to the public through December 2018. Come learn more about Mildred Cohn and many other APS Members who have changed the world we live in!

Processing of the Mildred Cohn papers was generously supported by the Arnold and Mabel Beckman Foundation.