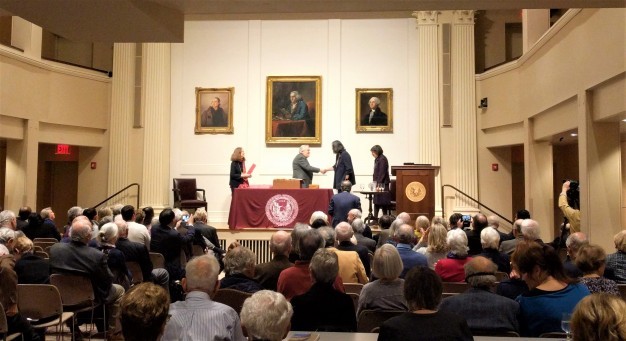 Cecilia Elena Rouse
Lawrence and Shirley Katzman and Lewis and Anna Ernst Professor in the Economics of Education, Professor of Economics and Public Affairs, Princeton University

CLASS 5  THE ARTS, PROFESSIONS, LEADERS IN PUBLIC AND PRIVATE AFFAIRS

The American Philosophical Society, the oldest learned society in the United States, was founded in 1743 by Benjamin Franklin for the purpose of “promoting useful knowledge.”  The Society sustains its mission in four principal ways. It honors and engages distinguished scientists, humanists, social scientists, and leaders in civic and cultural affairs through elected membership and opportunities for interdisciplinary, intellectual fellowship, particularly in the semi-annual Meetings in Philadelphia.  It supports research and discovery through grants and fellowships, lectures, publications, prizes, exhibitions, and public education.  It serves scholars through a research library of some 13 million manuscripts and other collections internationally recognized for their enduring scholarly value. The American Philosophical Society’s current activities reflect the founder’s spirit of inquiry, provide a forum for the free exchange of ideas, and convey the conviction of its members that intellectual inquiry and critical thought are inherently in the public interest.

Today the Society has 1,011 elected members, 847 resident members and 164 international members from more than two dozen foreign countries.   Only 5,746 members have been elected since 1743.  Since 1900, 269 members have received the Nobel Prize.