The ethnographic and linguistic collecting of the Library & Museum can be traced back to the Society’s third president, Thomas Jefferson, who sought to gather word lists of Indigenous languages in order to better understand the cultural relationships and interrelated histories of Native peoples. From this information he also developed federal Indian policies that were devastating to Native societies. The linguist and APS President Peter Stephen Du Ponceau (1760-1844)attempted to expand Jefferson’s data through broader collaboration with explorers, missionaries, academics, and Native language speakers themselves who were passing through Philadelphia. These activities expanded massively in the 20th century when the Society began to actively seek documentation recorded by field linguists and anthropologists who were dependent upon the linguistic, cultural, and historical knowledge of the Indigenous people with whom they worked.

Among the most commonly sought collections are the American Council of Learned Societies linguistic collection, the papers of Franz Boas, and the papers of many of his students (and their students,) such as Mary R. Haas, Frank Speck, and Ella Deloria. The collections also include the papers of historians, anthropological thinkers such as William Shedrick Willis, major historical figures such as Ely S. Parker, and oral histories from contemporary Indigenous people.

While manuscripts make up most of the material, the collections also contain over 130,000 photographs and other images, and over 3,500 hours of audio recordings, the latter of which are nearly all digitized and available through the APS Digital Library. The Library & Museum continues to collect widely in these areas and currently houses material dating from 1553 to 2019, relating to over 650 Indigenous cultures of the Americas.

A few of the major collections are highlighted below.

The Mary R. Haas Papers contain rich, extensive documentation of more than 90 different indigenous languages of the Americas, more languages than are found in the papers of any other person in the APS Library. Over a lengthy career, Mary R. Haas (1910–1996) became a leading figure in documentary, historical, and comparative linguistics, developing a reputation for precision and rigor. A student of Edward Sapir, her first fieldwork was with Ditidaht speakers in Vancouver Island in 1931, followed in the mid- to late-1930s by fieldwork in Oklahoma and the Southeast. During these years she recorded several thousand pages of stories, songs, and grammatical material in a dozen Native languages, including Creek, Natchez, and Tunica, often working with people now considered to be the last fluent speakers of some of these languages. Her notebooks are now being used by Native communities and linguists to build and strengthen new generations of speakers.

After World War II, Haas began teaching at the University of California, Berkeley and served as the first director (1953–1975) of the Survey of California and Other Indian Languages. Over these decades, in her student Karl Teeter’s words, "she trained more Americanist linguists than did [Franz] Boas and [Edward] Sapir put together.”

Frank Gouldsmith Speck (1881–1950) was one of the most prolific ethnographers of the early 20th century, focusing especially on Algonquian and Iroquoian-speaking peoples from the Carolinas to northern Quebec, Oklahoma to Ontario. Although he was chair of the Department of Anthropology at the University of Pennsylvania from 1913 to 1949, he was known to strongly prefer being out in the field. As one of Franz Boas’s earliest graduate students, he developed an interest in comparing the details of these neighboring cultures to determine how different practices and innovations were adopted and adapted to local needs over time. His manuscripts and extensive photographs from his travels are noteworthy for their focus on the practical particulars of everyday life that make up a culture, such as hunting, trapping, ceremonies, games, clothing, traditional crafts, and many other topics.

The cultures most prominent in Speck’s papers include the Catawba, Cherokee, Creek, Delaware, Houma, "Iroquois" (Haudenosaunee), Labrador "Eskimo" (Inuit), Mohegan, "Montagnais-Naskapi" (Ilnu/Innu), Nanticoke, Penobscot, Powhatan, Tunica, and Yuchi. In addition to his manuscript and extensive photograph collection, he also produced numerous hand-annotated maps in which he theorized on the traditional hunting territories of many of the cultures he studied.

From the 1880s to the 1940s, Franz Boas (1858–1942) helped to define academic anthropology in the United States. His first fieldwork was among the Inuit of Baffin Island in 1883. Through his subsequent focus on the cultures of the Northwest Coast, Boas became a central figure in American anthropology by the first decade of the 20th century, arguing against the dominant 19th-century theories of cultural evolution. As Professor of Anthropology at Columbia University, Boas trained a generation of students in linguistics and anthropology in methods still central to those fields to this day. He was also a leading public intellectual, known as an outspoken opponent of scientific racism, anti-Semitism, and fascism.

The APS holds six collections related to Franz Boas. The largest of these, The Franz Boas Papers, has been fully digitized and can be viewed online. The majority of Boas’s core fieldwork among many cultures, especially the Kwakwaka’wakw, who he referred to as the “Kwakiutl,” can be found in the American Council of Learned Societies Committee on Native American Languages (or ACLS) collection. This collection also contains foundational linguistic and ethnographic fieldwork relating to over 170 languages by Boas, his contemporaries, and his students. 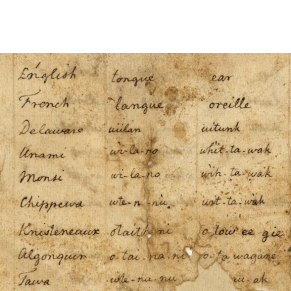 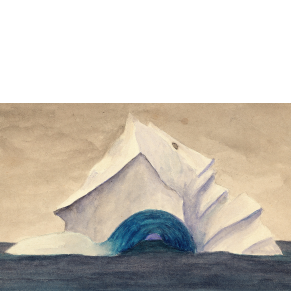 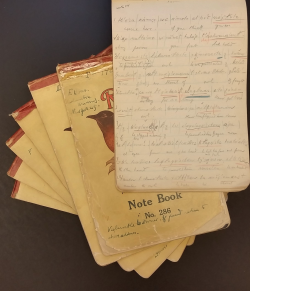 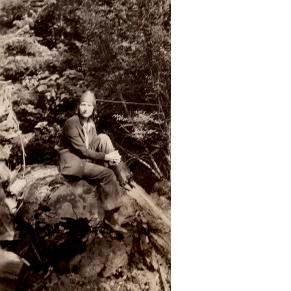 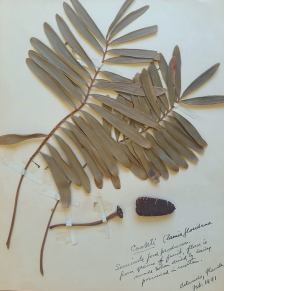 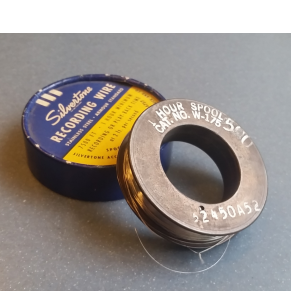 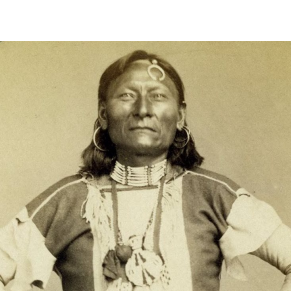 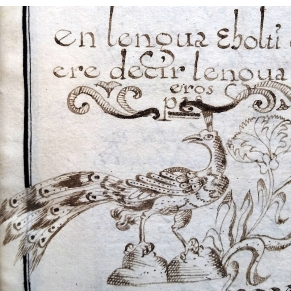 Thomas Jefferson compiled these vocabularies of 22 Native American languages based upon a 280-word list of standard English words that he devised, printed as broadsides, and sent to military officials and others who he thought would be in contact with Indians. This manuscript was partially damaged by a thief who dumped many of Jefferson's documents into the James River after he moved out of the White House back to Monticello in 1809. Although many of the original word lists were lost, this key compilation was mostly recovered. Fortunately, it still shows Jefferson’s work in trying to work out the similarities and differences among these languages. He theorized that this comparative study would be an ideal method for deducing the historical and cultural relationships of Native cultures and would represent "the best proof of the affinity of nations which could be produced."

At the universities of Heidelberg and Bonn, Franz Boas studied physics and geography before completing a doctorate in physical geography at Kiel in 1881. Intending on testing then-current theories of environmental determinism, he signed on to an anthropological expedition to Baffin Island in 1883–1884, expecting that he would document the close adaptative fit of Central Eskimo cultures to their extreme climate. His experiences in the Arctic, however, led him to the contrary conclusion: that social traditions, not environmental, exerted a dominant influence over human societies, and from this point onward, he was led to pursue the cultural over than physical dimensions of humanity. Boas drew this iceberg, located in the sound between Baffin and Cumberland Islands, on his first expedition to the Arctic.

Found in the American Council of Learned Societies (ACLS) Committee on Native American Languages collection, Franz Boas's field notebooks record vocabulary and texts from the Upper Chehalis dialect, spoken by Native American groups in the coastal Pacific Northwest. The ACLS collection is one of the largest and most significant primary resources for study of the indigenous languages of North America.

Pictured here on her first fieldwork trip in British Columbia in 1931, Mary R. Haas (1910–1996) was a leading contributor to documentary, historical, and comparative linguistics in North America.

This photograph shows two of the wire recordings in the large collection of audio recordings found in the APS Library. This particular audio collection consists of Ottawa songs, interviews, word lists, legends, Nanabojo stories, autobiographical stories, and information on Ottawa history. Some of the material is given in both Ottawa and English, some in Ottawa only. Recorded by Jane Ettawageshik in Michigan from 1947 to 1948. Most of the recordings in the APS collections have been digitized and added to our Digital Library: http://diglib.amphilsoc.org/islandora/graphics/native-american-recordings.

A. Zeno Shindler took this photograph of Chip-Pin, a Ute chief, during the Ute delegation's visit to Washington, DC in 1868. This portrait was one of 301 images that comprised the first photographic exhibition at the Smithsonian, documented in the catalog Photographic Portraits of North American Indians in the Gallery of the Smithsonian Institution (1867). Artist Antonio Zeno Shindler worked at the Smithsonian Institution from after the Civil War until the turn of the 20th century, specializing in ethnographic subjects. He was responsible for printing or taking a large number of photographs of American Indians exhibited there in 1869.

This is a copy of Francisco Moran's "libro grande" (1625-1650), and includes two versions of the grammar (in different hands), confessional materials, and a vocabulary of 500 words which has been added to the others. The volume is part of a larger collection of grammars, vocabularies, sermons, and other religious writings in the Kaqchikel and K'iche' languages of Guatemala presented to the APS by the Academia de ciencias de Guatemala, through Mariano Galvez, then Governor of Guatemala, in 1836.