The APS was an important early repository for historical material in the late colonial and early republic periods. Through the generosity of donors like Thomas Jefferson, the collecting savvy of long-serving librarian John Vaughan (1803–1841), and the planning of the Society's Historical and Literary Committee (1815–1820), the Society gathered an immense number of manuscript and printed sources relating to the new nation. By 1840, the APS had a large collection of Benjamin Franklin’s manuscripts, the Lewis and Clark Journals, and more than 11,000 books in its library. In addition, the Society’s own archive is an important source for understanding early American science. Future collecting efforts built upon this base during the 20th century when the APS acquired the papers of the artist-entrepreneurial Peale-Sellers family, the papers of the naturalist Benjamin Smith Barton, and the Thomas Paine Collection of Richard Gimbel.

A few of the collections are highlighted below.

The APS holds about 70 percent of the known Benjamin Franklin manuscripts, around 15,000 separate items. The collection touches upon every aspect of Franklin’s life: his printing career, his emergence as a prominent man of science, and his career as a statesman and diplomat. While the bulk of the papers came to the APS through the Fox Family in the 1840s, other additions were made in the later 19th and 20th centuries:

The Library of Benjamin Vaughan

The personal library of Benjamin Vaughan—a close associate of Benjamin Franklin—was supposedly the largest in New England at the end of the 18th century with the exception of Harvard’s. Vaughan was a British diplomat during the negotiations of the Treaty of Paris in 1783, later became a Member of Parliament, but was forced to flee to the United States when his republican beliefs and support of the French Revolution angered the British government. The APS collection contains 1,500 volumes reflecting the varied interests of that great Whig intellectual, including the classics from Linnaeus to Locke and Voltaire, but also less well known works on dissenting religion, important medical treatises, and works on agriculture, education, and navigation.

A physician, natural historian, and professor at the University of Pennsylvania, Benjamin Smith Barton (1766–1815) was one of the central figures in Philadelphia's early national scientific establishment. Thomas Jefferson asked Barton to assist Meriwether Lewis in his scientific preparation for the Corps of Discovery, and after Lewis's untimely death in 1809, Barton assisted in analyzing the natural historical results of the expedition. Barton wrote widely on a variety of topics include an important book on rattlesnakes, another on the biology and archaeology of Native Americans, and founded one of the nation’s first medical journals, the Philadelphia Medical and Physical Journal (1804–1809). The collection also includes a particularly valuable series of botanical, medical, and natural historical drawings collected by Barton for research, reference, and publication. Among the many artists represented are William Bartram, Frederick Pursh, Pierre Turpin, and Benjamin Henry Latrobe.

The Colonel Richard Gimbel Collection of Thomas Paine Papers is a heterogeneous mix of items connected only by the fact that they were all collected by Gimbel (1898–1970) and that most were written by, to, or about Thomas Paine. Probably best known for his pamphlet Common Sense (Philadelphia, 1776), Paine was a prolific republican theorist, free thinker, and political writer in the late 18th and early 19th centuries. The collection contains more than 4,500 items including books, pamphlets, newspapers, broadsides, and cartoons. Additionally, it contains a variety of ephemera relating to Paine such as playing cards, postage stamps, and tokens. 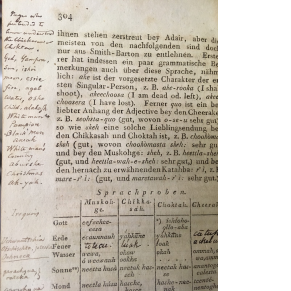 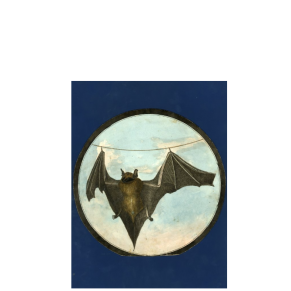 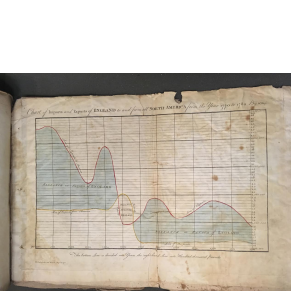 “Chart of the Imports and Exports of England to and from all North America from the Year 1770 to 1782,” in William Playfair, The Commercial and Political Atlas: Representing, by Means of Stained Copper-Plate charts, the Exports, Imports, and General Trade of England … from the year 1700 to 1782 … (London: [1785]). From the Library of Benjamin Vaughan.

A gifted linguist, Du Ponceau was the president of the APS from 1827 to 1844. His work on Native American languages attempted to demonstrate the relationships between Indian tribes based on the similarities or differences of their languages. On this page of Johann Christoph Adelung’s pathbreaking book on world languages, Mithridates, completed after his death by his disciple Johann Vater, Du Ponceau records his meeting with a “Negro who pretended to have understood the Chickasaw & Choktaw [languages].” It provides a sense of Du Ponceau’s dedication to his research. 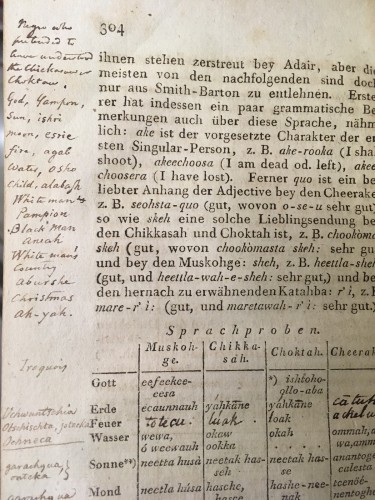 This watercolor in the Benjamin Smith Barton Papers depicts a vespertilionid bat and was possibly created by his colleague, Titian Ramsey Peale. It is just one of many pen and watercolor drawings and engravings of botanical and natural historical subjects by Barton and his circle, including William Bartram, three illustrations of rattlesnake anatomy attributed to Benjamin Henry Latrobe, and other works by Frederick Pursh, Pierre Turpin, and other artists. 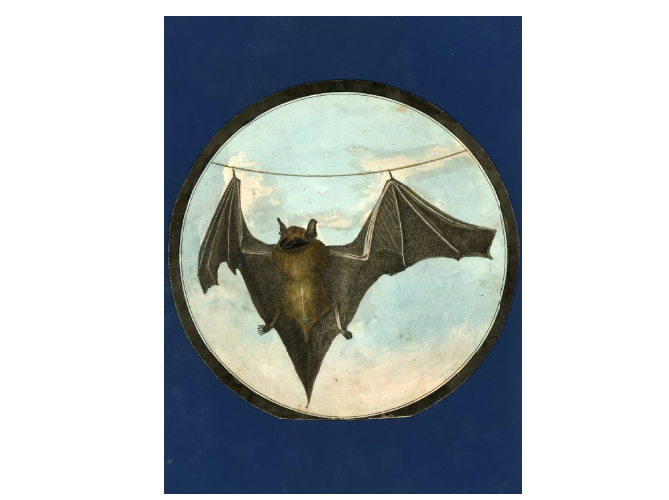 “Chart of the Imports and Exports of England to and from all North America from the Year 1770 to 1782,” in William Playfair, The Commercial and Political Atlas: Representing, by Means of Stained Copper-Plate charts, the Exports, Imports, and General Trade of England … from the year 1700 to 1782 … (London: [1785]). From the Library of Benjamin Vaughan.

This chart is from the first edition of what is probably the first publication to contain statistical charts. Playfair was a Scottish engineer and political economist who founded graphical methods of statistics. Early in his career he worked for the inventor James Watt at his steam engine manufacturing works in Birmingham, where he received a scientific and engineering training. This oblong volume from Benjamin Vaughan’s library contains charts describing the balance of trade between Britain and a number of countries and colonies, including the American colonies and the United States in this image. The visual data offered readers a new way to understand the balance of trade between nations at the heart of the mercantilist political economic system of the period. 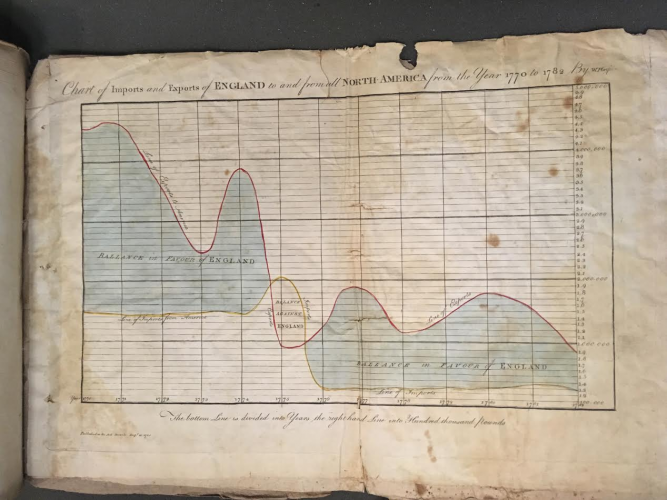