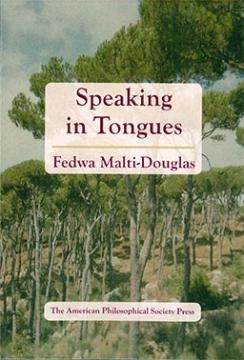 Fedwa Malti-Douglas offers an intensely personal and moving account of her life, from her early childhood in Lebanon, to her teenage years in Ithaca, to her brilliant career as a Middle Eastern Studies scholar in Indiana, and finally to her new life in New York with her husband of many years, Allen. Speaking in Tongues tells “the story of a family torn apart by divorce, death, and exile, and reunited by an inherited form of muscular dystrophy.”

Fedwa Malti-Douglas is the Martha C. Kraft Professor of Humanities, Emeritus at Indiana University, Bloomington. She has received numerous fellowships, endowed lectureships, and prizes, including the 1997 Kuwait Prize for Arts. She was elected a Member of the American Philosophical Society in 2004 and was awarded the 2014 National Humanities Medal by President Obama.

". . . displays a poet’s eye for evocative imagery . . . and a novelist’s mastery of compelling storytelling."
—John Drury

". . . crosses landscapes of sadness, of happiness, of pain and peace, of alienation and acceptance toward a healing enlargement of the soul."
—Jeffrey Levine