Season of Conspiracy: Calvin, the French Reformed Curches, and Protestant Plotting in the Reign of Francis II (1559-60) 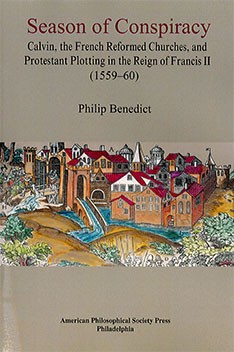 Season of Conspiracy considers the March 1560 conspiracy of Amboise and subsequent plots devised later that year to remove the young King Francis II from the sway of his chief advisors of the house of Guise and improve the legal situation of France's Protestant movement. New and rediscovered evidence—most important, the long-lost testimony of a cabinetmaker engaged in the plotting from January through September—reveals the conspiracies to have been more closely linked to the network of Reformed churches within France and to John Calvin in Geneva than previously understood. The results compel a reconsideration not only of events that are often said to have constituted the first act of the French Wars of Religion, but also of Calvin's political engagement and sagacity.

Philip Benedict is an American historian of Reformation and Early Modern France and Europe. He is Emeritus Professor of the University of Geneva's Institute for Reformation History, to which he was appointed in 2005 after teaching for twenty-six years at Brown University. His publications include Rouen During the Wars of Religion (Cambridge University Press, 1981), Christ's Churches Purely Reformed: A Social History of Calvinism (Yale University Press, 2002), and Graphic History: The "Wars, Massacres and Troubles" of Tortorel and Perrissin (Droz, 2007). Dr. Benedict previously worked with the American Philosophical Society on his 1991 monograph, The Huguenot Population of France, 1600–1685: The Demographic Fate and Customs of a Religious Minority (Transactions, Volume 81, Part 5).