The Rothschilds and the Gold Rush: Benjamin Davidson and Heinrich Schliemann in California, 1851–52 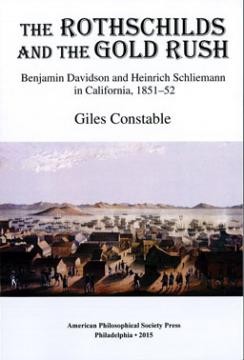 In this extraordinary monograph, based on a totally new array of sources, Giles Constable successfully chronicles the month-to-month, quarter-to-quarter cash transactions and other business between the Rothschild ownership and their agents in Sacramento, Benjamin Davidson and Heinrich Schliemann. In doing this, Constable succeeds in presenting a case study that embraces both the macroeconomics of the California Gold Rush vis-a-vis international finance as well as the microeconomics of as close as one can come to day-to-day issues of credit, cash exchange, wealth transference, insurance, and risk as experienced between 1851 and 1852.

"This monograph is based on the kind of records that have usually disappeared in the case of California, given the flooding and fire that destroyed Sacramento and the six times that San Francisco burned down during these two years. To find such a treasure trove, then, on the European side of the exchange, supplemented by rare surviving California sources, renders this study significant—and indeed, a page-turner—from start to finish."
—Kevin Starr
Author of Golden Dreams: California in an Age of Abundance, 1950–1963 (Oxford University Press, 2009) and California: A History (Random House, 2005)

"The profitability of the gold dust business—as evidenced by the large European houses engaged in it—meant a high degree of competition. Rothschild agent Benjamin Davidson appointed Heinrich Schliemann his agent in San Francisco. Although neither fully trusted the other, they were joined in the gold dust business on a large scale. The partnership ended in April 1852 and, when this business collaboration ended, a fascinating window on the early entrepreneurial history of California also closed."
—Malcolm Rohrbough
Author of Rush to Gold: The French and the California Gold Rush, 1848–1854 (Yale University Press, 2013) and Days of Gold: The California Gold Rush and the American Nation (University of California Press, 1997)