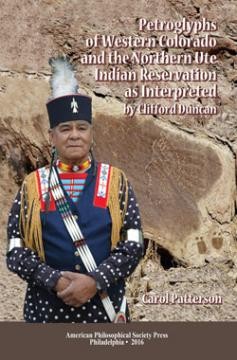 "People must be educated about the rock art. That's how it will be protected."
—Clifford Duncan

Clifford Duncan, a Northern Ute elder, believed in educating the public to know and understand the meaning of Ute petroglyphs. By doing this, he believed it would help to preserve and protect them. Over the course of eight years, Clifford and the author, Carol Patterson, visited and revisited all of these sites, discussing what they might represent. Clifford's father was an Uncompahgre Ute and wanted Clifford to know the traditional homelands of the Uncompahgres in western Colorado. Clifford made special trips all through the Uncompahgre Plateau (by car, on foot, and on horseback), seeking out any Ute petroglyphs and cultural sites. Later in his life, he and Patterson visited many of the petroglyphs on the Uintah–Ouray Reservation, along Hill Creek and Willow Creek. These petroglyphs were authored by the Uncompahgre and White River Utes.

The interpretations of the petroglyphs of western Colorado and the Uintah–Ouray Reservation are supplemented with cultural and political history to provide a background context to Clifford's interpretations. In addition, ethnographic information from other scholars provides readers with a deep appreciation as to what makes Ute petroglyphs so unique and fascinating.

Anthropologist Carol Patterson was Adjunct Professor for Colorado Mesa University and Metropolitan State University, Colorado. She is principal investigator for Urraca Archaeology, Montrose, Colorado. Recent publications include Shavano Valley Petroglyph Guide (2015) and "Concepts of Spirit in Rock Art According to Clifford Duncan, Ute Spiritual Elder," in Sacred Landscapes, One World Archaeology Series (2014). Dr. Patterson's earlier publications include Petroglyphs and Pueblo Myths of the Rio Grande (1993) and On the Trail of Spiderwoman, Pictographs and Petroglyphs of the Southwest (1997).