Parmigianino's Madonna of the Long Neck: A Grace Beyond the Reach of Art 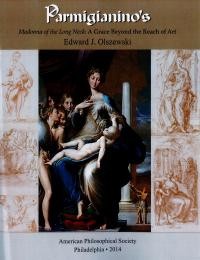 This study is the first to offer a comprehensive overview of Parmigianino’s enigmatic painting of The Madonna of the Long Neck in the Uffizi. It expands previous formalistic discussions to treat the subject in terms of iconography, semiotics, studio practice, and art theory.

It is argued that the painting is not merely an example of Mannerist extravagance, but that the Virgin in her extraordinary distension can be explained by a litany in Ecclesiasticus, with her enlargement read as a signifier of her mercy (Misericordia). Parmigianino’s panel is interpreted as an Immaculate Conception. Because the Magisterium had not fully defined the belief as dogma, the theological debate confused the artist and his contemporaries, but also gave them flexibility in their depictions of this abstract doctrine. The painting is situated with others of the subject from Leonardo and Giovanni Bellini to Federico Barocci and El Greco. The Madonna’s pose conforms with feminine decorum as dictated by contemporary treatises on dance and other writings. The subject’s genesis as a theological exercise is traced through the artist’s drawings.

Edward J. Olszewski is Professor Emeritus of Art History at Case Western Reserve University. He retired as Chair of the Department of Art History in December 2010. He has published a multi-volume corpus of drawings with Harvey Miller, a drawings catalogue (The Draftsman’s Eye, 1981), and numerous articles on Renaissance patronage, iconography, and art theory. Dr. Olszewski is the author of Cardinal Pietro Ottoboni (1667–1740) and the Vatican Tomb of Pope Alexander VIII, published by the American Philosophical Society in 2004. The book received the John Frederick Lewis Award, presented by the Society each year for the best book or manuscript by an American citizen published or accepted by the Society.