A More Perfect Union: Essays on the Constitution 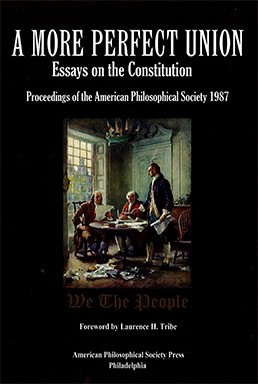 In commemoration of the 275th anniversary of the American Philosophical Society, this monograph is a reprint of articles from a symposium marking the 1987 bicentennial of the United States Constitution. Added to the collection is a significant and educational foreword by Laurence H. Tribe (Member of the American Philosophical Society, Class III, elected 2010), Carl M. Loeb University Professor of Constitutional Law at Harvard Law School. Also included is a transcript of Professor Tribe's Commencement Address delivered on May 17, 1987, at the American University Washington College of Law Commencement at the John F. Kennedy Center for the Performing Arts, Washington, DC (published in 37 American University Law Review 1; reprinted with permission).