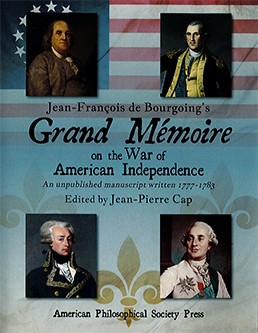 Between 1777 and 1783, Jean-François de Bourgoing served at the Court of Spain as France’s military attaché and principal assistant to the French ambassador. Bourgoing was a French patriot and a friend of Spain. From his unique vantage point he recorded events related to the War of American Independence as they occurred, creating Le Grand Mémoire.

The French and the Americans hoped that Spain would recognize the independence of the United States and enter the war as their ally. Instead, Spain entered the war against England only as France’s ally stipulating that France would help her recover some of her lost possessions. Until the summer of 1781, France continued to try in vain to persuade Spain to join the Franco-American alliance. But the Spanish remained convinced that supporting the independence of the United States would be detrimental to her interest and actively opposed the independence of the United States by attempting to obtain through extensive mediation with England “something less than full independence,” by advocating minimal aid to the Insurgents only “to keep the war going,” and by attempting to change France’s strategy. In 1780 Floridablanca tried very hard to prevent France from sending the Rochambeau expeditionary corps to help Washington.

All the while Spain demanded French naval support and land troops for all her significant operations while refusing to participate in French operations. The French diplomats in Madrid thought that France’s alliance with Spain was counterproductive and harmful to French relations with Americans.

The Grand Mémoire is essential to fully understand not only inter-ally relations but also the effects of the war on France, spectator countries, and individuals who played essential roles in the war: Charles III, Floridablanca, Aranda, John Jay, Louis XVI, Vergennes, Montmorin, d’Estaing and Castries.