Citizenship and the American Revolution: A Resolute Tory's Abiding Status 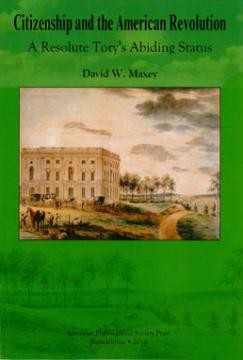 What was the status of a resident of New Jersey or Pennsylvania on July 5, 1776 or for several months, even years, after the Declaration of Independence? When did a person living in one of the rebellious colonies cease to be the subject of George III and become a citizen of a newly constituted American state? Well into the 19th century, uncertainty persisted regarding citizenship acquired (or lost) during the Revolution. Turning to original sources, David W. Maxey brings into clear focus a family dispute over inheritance rights and the task the United States Supreme Court faced in determining the status of Daniel Coxe—either as a citizen of New Jersey entitled to inherit, or as an alien barred from doing so. Having heard the arguments of opposing counsel on two separate occasions, the Supreme Court announced its decision in 1808. Twenty years later, the Court measurably diverged from the rationale supporting that decision.

"Maxey’s account of Coxe’s legal adventures is both a very good story, exceedingly well-told, and an important comment on the evolving nature of citizenship in the early United States. Maxey sorts out an issue that the nascent United States Supreme Court struggled with for several years, clarifying an issue that has stumped legal scholars. This is a very fine piece of scholarship and narrative."
—Stanley N. Katz
Professor of Public and International Affairs, Woodrow Wilson School
Princeton University
Past President, American Society for Legal History
Member of the American Philosophical Society (elected 1996)

"Although this venture into legal history deals with complex issues of law, David W. Maxey presents the material in a clear, cogent, and coherent manner. He provides insight into the subject of citizenship and the American Revolution through an exploration into a dispute over an estate between members of a wealthy and distinguished colonial family, a dispute that lasted many years and reached the Supreme Court of the United States. Maxey puts the legal dispute into a broader context. First, he offers a lot of interesting material on the people who were the actors in the legal drams. Secondly, he casts light on the issue of citizenship and revolution."
—Barbara Aronstein Black
Professor Emerita of Legal History and Dean Emerita, Faculty of Law
Columbia University
Member of the American Philosophical Society (elected 1991)