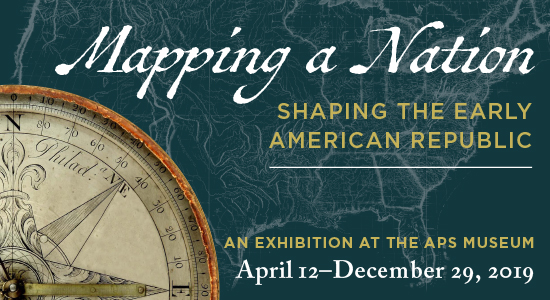 “Indeed, what is the history of a country without maps?”
–Sebastian Bauman (1782)

Philadelphia [April 10, 2019]—Why would a government publish a map claiming land they do not control? Why would the citizens of a young nation—still recovering from a war for independence—care about making maps? Opening April 12, 2019, the new exhibition from the American Philosophical Society Museum, Mapping a Nation: Shaping the Early American Republic, traces the creation and uses of maps from the mid-18th century through 1816 to investigate maps’ political and social meanings.

The exhibition draws on the APS Museum and Library’s extensive holdings and will feature significant Early American maps, the tools that were used to create them, and historical artifacts that represent the figures who negotiated the landscape of the early United States.

“Early American maps were practical tools that defined physical and political borders,” said APS Museum Director Merrill Mason, “but many of the maps we have on display were also works of art and feats of printing technology.”

The exhibition traces the history of mapmaking in early America through three phases titled “Empires in Motion,” “Civic Geography,” and “From Sea to Sea.”

Empires in Motion
During the colonial era, European powers competed for North American territory, often making maps that overstated their claims. They also consulted Native American informants and sent out surveyors, mapmakers, and naturalists to learn as much as they could about the continent’s people, geography, plants, and animals. Highlights from this section include:

Civic Geography
After the American Revolution, mapmakers shaped national identity by defining the borders of the newly united states. Maps on display from this era include:

From Sea to Sea
As the United States entered the 19th century, westward expansion became one of the federal government’s priorities. Maps from this period show the nation’s growing infrastructure and expeditions across the continent. Postal routes and road systems soon stretched into the frontier, encouraging settlement by white Americans, many of whom envisioned the expansion of slavery, and obscuring the presence of Native Americans. Visitors will be able to see:

The exhibition will be open Thursday–Sunday through December 29, 2019 in Philosophical Hall, 104 South Fifth Street, Philadelphia. Admission is free, but donations are encouraged. Groups can schedule tours by contacting museumeducation@amphilsoc.org.

About the APS Museum
Founded in 2001, the APS Museum is located adjacent to Independence Hall in Philadelphia’s historic district. It develops thematic exhibitions from the Society’s collections of over 13 million manuscripts, rare books, artworks, scientific instruments, Native American materials, and other historical objects. Programs expand upon the themes and objects in the exhibitions and relate them to relevant issues today.