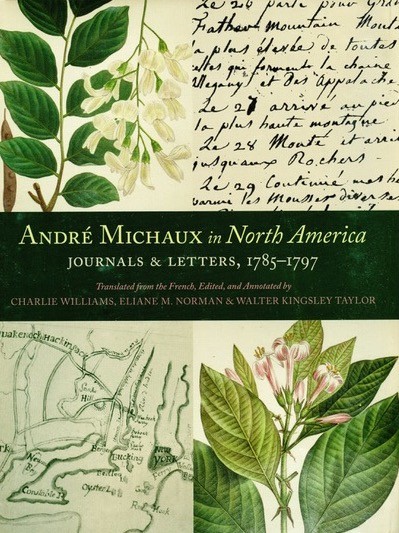 March 2021 marks the 275th anniversary of the birth of French botanist and explorer André Michaux (1746-1802) who was sent to the U.S. in 1785 by King Louis XVI as a plant collector. Although widely known in his own era, Michaux is little remembered today outside botany. He was the first botanist to visit many frontier areas as well as author of two landmark botanical books. His son François André Michaux (1770-1855), who had accompanied his father to America, became a distinguished botanist himself, and a member of the APS. He presented his father’s surviving original journals to the APS in 1824. These documents were transcribed in the original French and published in APS Proceedings in 1889, however, there was no published English translation of all the extant journals until 2020 when the University of Alabama Press published André Michaux in North America Journals and Letters, 1785-1796. This copiously annotated volume also includes important excerpts from his little-known correspondence, a wealth of illustrations, and is the result of a decade and a half of study by three seasoned scholars of Michaux and his work.

Join us for a virtual discussion that will provide an overview of André Michaux’s career and highlight two of his North American journeys. The first, his 1787 botanical journey to the headwaters of the Savannah River where he encountered the plant that Harvard botanist Asa Gray later named Shortia, and that became famous as the “lost Shortia” because it couldn’t be relocated. The second journey examined will be Michaux’s 1793 political journey to Kentucky on behalf of Citizen Genet, that most infamous of France’s ambassadors to the U.S. This episode has led to a misunderstanding of Michaux’s principal work in North America, and caused some to label him as a Frenchman spying on America.

The event will take place on Wednesday, March 10 at 1:00 p.m. EST via Zoom. The event is free of charge, but registration is required to attend.

Charlie Williams is retired from the Charlotte-Mecklenburg Library, Charlotte, N.C. He chaired the 2002 André Michaux International Symposium at Belmont Abbey College, the 2007 Oconee Bell Celebration at Clemson Univ., and in 2011 edited the Annotated Memoirs of the Life and Botanical Travels of André Michaux by J.P.F. Deleuze originally published in 1804.

Eliane M. Norman, Ph.D. is Professor Emeritus of Biology at Stetson Univ., authored the botanical monograph on the Buddlejaceae, and co-authored with Walter Kingsley Taylor, André Michaux in Florida, 2002.

Walter Kingsley Taylor, Ph.D. is Professor Emeritus of Biology at the Univ. of Central Florida, author of field guides to Florida grasses and Florida wildflowers, and co-author with Eliane Norman of André Michaux in Florida, 2002.