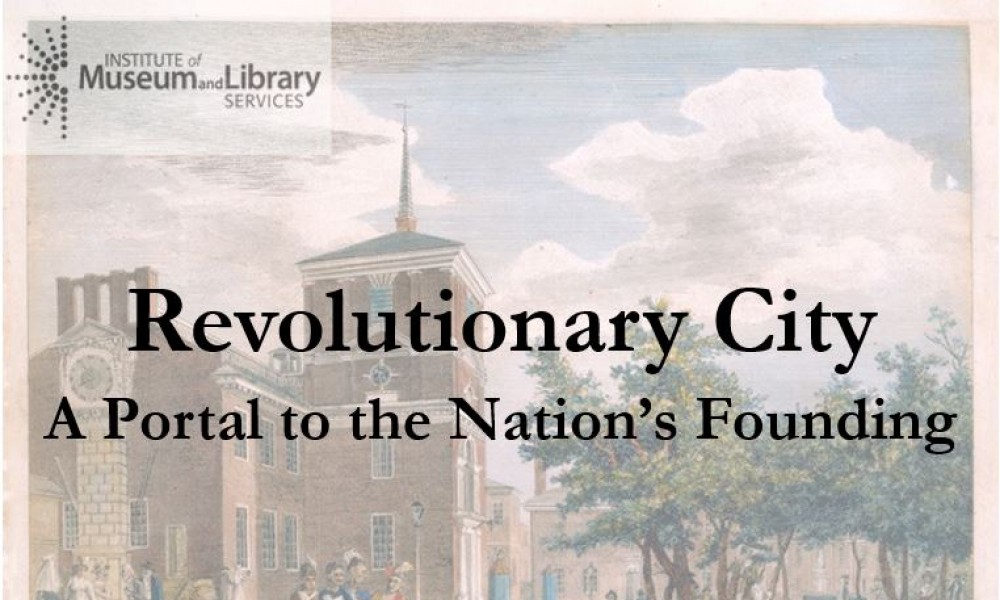 With an eye towards the 250th anniversary of our nation’s founding in 2026, the American Philosophical Society (APS), in partnership with the Historical Society of Pennsylvania (HSP), and the Library Company of Philadelphia (LCP), will lay the groundwork for the development of an innovative digital portal that will uncover hidden stories from Philadelphia’s revolutionary past.

Thanks to a National Leadership Grant from the Institute of Museum and Library Services (IMLS), these three Philadelphia institutions will create a shared online portal of digitized archival material related to the American Revolution. This portal will break down the institutional barriers between these archives, allowing users to discover stories that had previously been obscured by the physical separation of collections. Both the APS and LCP, founded by Benjamin Franklin, and the HSP, founded to celebrate the memory of the Revolution, hold large and invaluable collections related to the American Revolution and the early national period. But whereas the stories of founders like Franklin and Jefferson are well known, the scattered nature of the records of lesser-known actors has made those lives less accessible to wide audiences. Revolutionary City seeks to remedy that by highlighting the lives of a more diverse Philadelphia.

Some examples of stories waiting to be told, according to HSP Interim President and CEO Charles Cullen are, “Sarah Wister’s journal and Elizabeth Drinker’s diaries, manuscripts containing estimates of damage done by the British occupation, foot-soldier Aaron Norcross, and rich collections of papers of Revolutionary women.”

The project has the backing of America250, the federal commission overseeing the 250th anniversary of 1776.

“America 250’s goal is to educate, engage, and unite all Americans in a commemoration that is of, by, and for the people. The American Philosophical Society’s receipt of the IMLS National Leadership Grant to pursue this innovative and engaging initiative is an important step forward,” said Frank Giordano, Executive Director of the U.S. Semiquincentennial Commission (America 250). “I am confident that the commitment made by these three institutions to bring together the diverse perspectives of educators, public historians, and digital humanists will shed light on untold American stories, promote greater historical education, and encourage broader conversations about the meaning and promise of the United States not only among Philadelphians, but across the country.”

“Most histories of Philadelphia in the revolution focus on the work of the founders and the drafting of Declaration of Independence,” says Barsanti, “This project will allow people to see how it was experienced by ordinary Philadelphians, and will reflect the extraordinary diversity that characterized us even then. It is also a remarkable opportunity for three of Philadelphia’s great historical organizations to work together on a project that brings their collections to the world.”

Aside from its compelling content, the project promises to yield important technological innovations for libraries and archives and become a model for institutional collaboration.

“Our goal is to create a unified digital repository shared between three institutions,” Patrick Spero, Librarian of the American Philosophical Society noted, “To do that, we need to create ways for our separate systems to talk to one another. If we’re successful, we hope to expand the scale of this project to include other partners from around the region and perhaps country to create as complete a record of the American Revolution in Philadelphia as possible.”

This one-year pilot grant will fund the planning phase of Revolutionary City and support the APS, HSP, and LCP as they focus on material related to Philadelphia, establishing the foundation for a portal that has the potential to expand to include sources on the Revolution from archives from around the country. Together, the APS, HSP, and LCP see the long-term vision of the portal as a one-stop-shop for students, teachers, scholars, and other lovers of history seeking to access materials related to the Revolutionary War and founding of the United States.