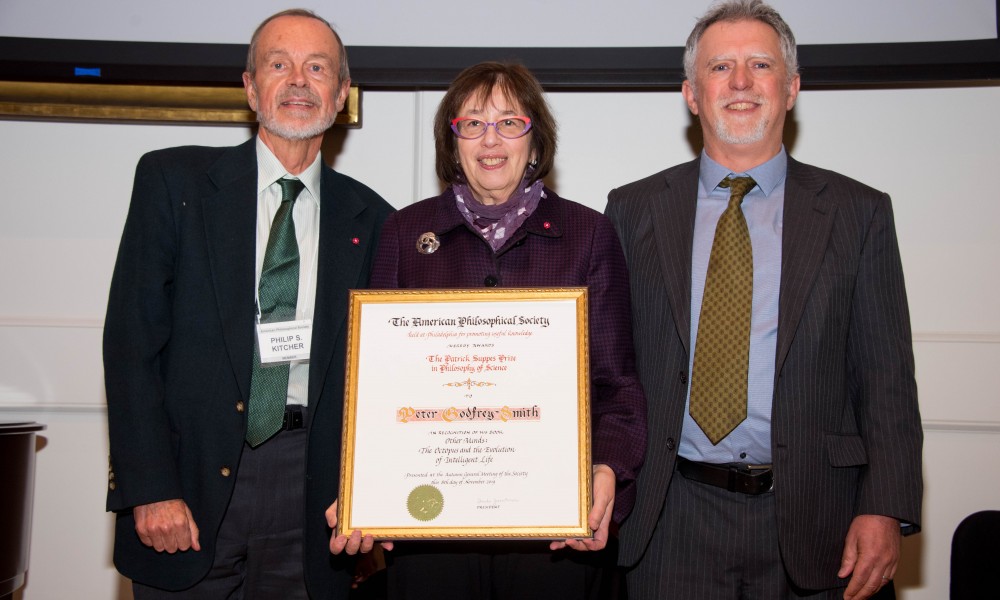 The recipient of the 2019 Patrick Suppes Prize in Philosophy of Science is Peter Godfrey-Smith in recognition of his book Other Minds: The Octopus and the Evolution of Intelligent Life.   He was awarded the prize at the APS Autumn Meeting on November 8, 2019.Other Minds is an accessible yet extremely original exploration of the philosophical implications of contemporary studies of a remarkable family of animals.  Recent work on animal behavior has recognized clear signs of intelligence in various mammals – chimpanzees, dolphins, and elephants, to name just three– and in some birds (notably corvids).  Outside these, higher cognitive functions seem to be absent.  With one exception.  Octopuses and cuttlefish can do extraordinary things.

Peter Godfrey-Smith doesn’t simply report what ethologists have discovered.  He has helped build the current picture of these animals and their accomplishments.  His book draws on many areas of science – paleontology, evolutionary theory, neuroscience, and psychology – and it includes his own observations of the site, Octopolis, that he helped make central to studies of octopus and cuttlefish behavior.  From this empirical material, Godfrey-Smith draws implications for the philosophy of biology and our understanding of Darwinian evolution.  Furthermore, he transforms the standard discussions of non-human animal experience.  Octopuses and cuttlefish pose a challenge to traditional ways of thinking in philosophical psychology.  They suggest a need for philosophers, psychologists, and neuroscientists to rethink fundamental categories like perception and action and to turn from their longstanding obsession with consciousness to focus instead on the more fundamental notion of subjective experience.  Other Minds spurs new modes of thinking.  It is a model of philosophy from science and a book that can inform and entertain readers with different backgrounds.

Peter Godfrey-Smith is professor in the School of History and Philosophy of Science at the University of Sydney.