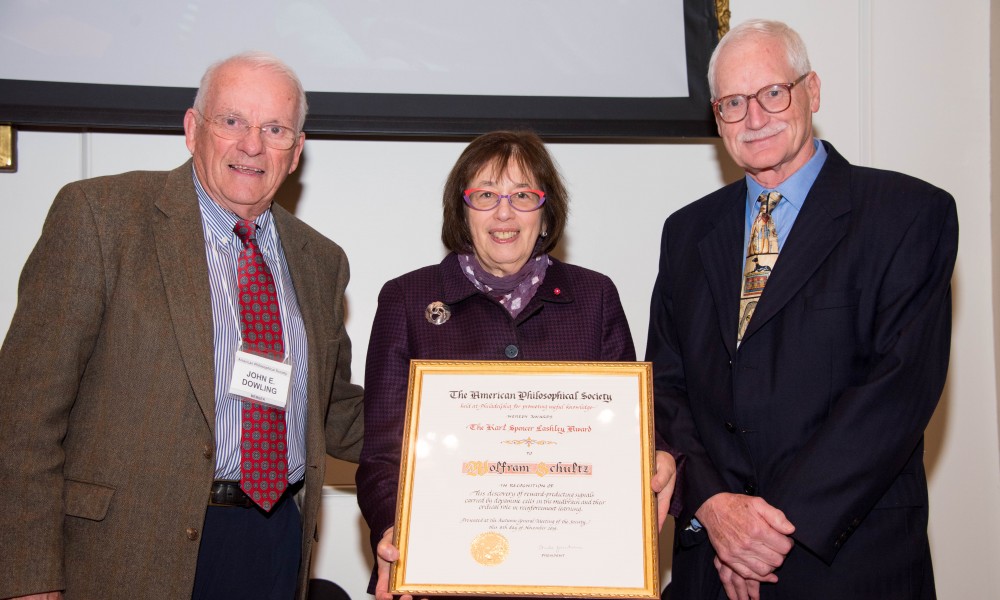 The recipient of the 2019 Karl Spencer Lashley Award is Wolfram Schultz, Professor of Neuroscience at the University of Cambridge, in recognition of “his discovery of reward-predicting signals carried by dopamine cells in the midbrain and their critical role in reinforcement learning.” He was presented with the award at the American Philosophical Society's Autumn Meeting on November 8, 2019.

Through elegant empirical studies in nonhuman primates, Wolfram Schultz discovered reward-predicting signals that are encoded in the electrical activity of midbrain dopamine neurons.  Assessing the reward value of environmental objects, locations, and potential actions is critical to motivated behavior.  Schultz showed that the activity of dopamine neurons is not linked to the delivery of reward per se, but rather to the information value of a reward.  More formally, dopamine neurons signal reward prediction error, an essential component of value estimation in models of reinforcement learning. Schultz’s discoveries inform our understanding of diverse aspects of human behavior and cognition, including habit learning, decision-making, addiction, and neuropsychiatric conditions such as Tourette's syndrome and obsessive-compulsive disorder.

The Karl Spencer Lashley Award was established in 1957 by a gift from Dr. Lashley, a member of the Society and a distinguished neuroscientist and neuropsychologist.  His entire scientific life was spent in the study of behavior and its neural basis.  Dr. Lashley’s famous experiments on the brain mechanisms of learning, memory and intelligence helped inaugurate the modern era of integrative neuroscience, and the Lashley Award recognizes innovative work that continues exploration in the field.