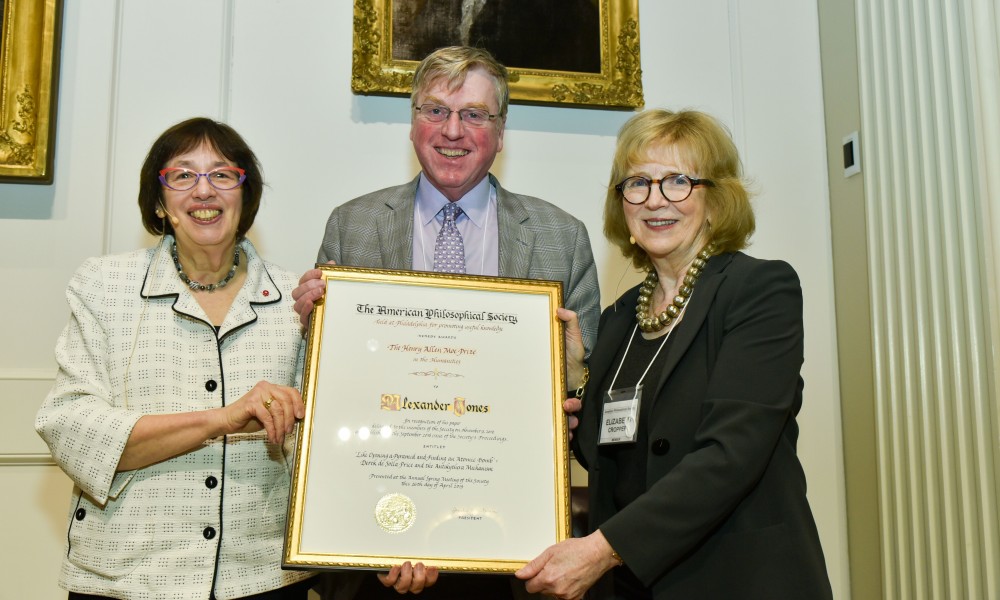 The recipient selected for the 2019 Henry Allen Moe Prize in the Humanities is Alexander Jones, Professor of History of the Exact Sciences in Antiquity and Leon Levy Director of the Institute for the Study of the Ancient World, New York University, in recognition of his paper “‘Like Opening a Pyramid and Finding an Atomic Bomb’: Derek de Solla Price and the Antikythera Mechanism” read at the American Philosophical Society’s 2017 November Meeting and published in its Proceedings Volume 162, Number 3, September 2018. The award was presented April 26, 2019 at the Society's Spring 2019 Meeting.

Alexander Jones recounts advances in the understanding of an obscure archaeological artifact as a series of discoveries and near-misses that began with a grant to Derek de Solla Price from the American Philosophical Society in 1958. As Jones puts it, his essay is, in a sense, a review of an American Philosophical Society research grant and its outcomes. In part a historical detective story about the most important fine machinery to survive from Antiquity, in part a history of scientific inquiry and the role of new technologies, Jones’s essay renders comprehensible the complexity of piecing together this ancient artifact.

Small pieces of corroded metal were salvaged from a Hellenistic shipwreck off the island of Antikythera in 1900–1901. Identified as parts of a Mechanism, they attracted little attention until Price traveled to Athens. Close examination suggested that the Mechanism was not an Archimedean planetarium, as thought, but a mechanical representation of the ancient Babylonian arithmetical approach to mathematical astronomy.

Price’s popular publication in Scientific American in 1959 diverted him from contributing to the 1965 Transactions dedicated to the Antikythera shipwreck, but his crucial conclusions appeared in the Transactions in 1974. Jones shows how such new techniques as microfocus X-ray computed tomography and reflectance transformation imaging have made it possible to improve Price’s reconstruction. The Mechanism was not a “calendar computer” or an atomic bomb in a pyramid, but a sophisticated instrument that displayed the synodic cycles of the planets. Price lacked adequate radiography, and failed to recognize that the dials consisted of spirals, not concentric circles. But his successors would untangle the meaning of the Mechanism that Price had done so much to explain based on his original APS grant.

The prize was established in 1982 by a gift from the widow of Henry Allen Moe, to honor the longtime head of the Guggenheim Foundation and president of the American Philosophical Society from 1959 to 1970. It pays particular tribute to his firm commitment to the humanities and those who pursue them.  The prize is awarded annually to the author of a paper in the humanities or jurisprudence read at a meeting of the Society.