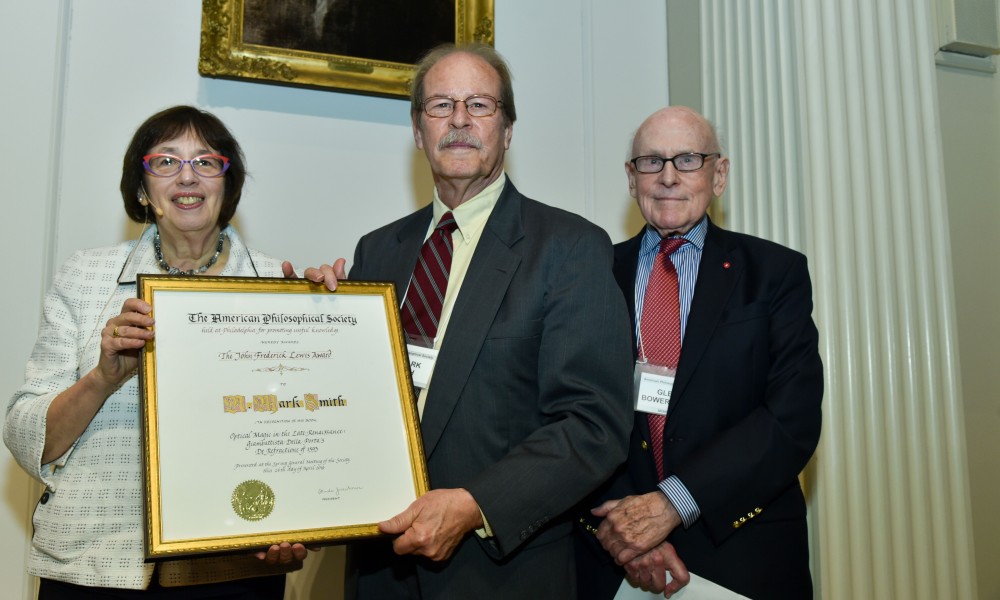 The recipient for the 2017 John Frederick Lewis Award is A. Mark Smith in recognition of his book Optical Magic in the Late Renaissance: Giambattista Della Porta’s 'De Refractione' of 1593. The award was presented April 26, 2019 at the Society Spring 2019 meeting.

Mark Smith presents a “critical English translation” of Giambattista Della Porta’s De Refractione (1593). Offering a general introduction that deals with both the treatise’s historical  context and its technical aspects, Dr. Smith gives readers an account of Della Porta’s life and works, a discussion of the genesis of De Refractione, a close examination of his account of visual illusions and their environmental or pathological causes, and a study of the historical significance of Della Porta’s account of light and sight within the broader context of natural philosophy as it evolved in the late sixteenth and early seventeenth centuries. Following the Introduction is a “modernized” transcription of the original Latin text and the English translation of the transcription. The transcription provided by Dr. Smith is important because the printed original is incredibly disordered and maladroit. Not only does it abound in textual errors, some of them significant, but the accompanying diagrams are often so poorly executed as to be misleading.

Mark Smith is Curators’ Distinguished Professor at the University of Missouri. He teaches a variety of courses in medieval history as well as the history of science from antiquity to the late Enlightenment. His interests lie in the field of intellectual history from the pre-Socratics to the Enlightenment, his scholarly focus being on the evolution of pre-Newtonian theories of visual perception. His earlier publications with the American Philosophical Society include Ptolemy’s Theory of Visual Perception: An English Translation of the Optics with Introduction and Commentary (1996), Ptolemy and the Foundations of Ancient Mathematical Optics: A Source Based Study Guide (1999), and a seven-volume collection of books on Alhacen’s Optics (2001-2010). Dr. Smith received the Lewis Award in 2001 for Alhacen’s Theory of Visual Perception (Volume 1) and in 2010 Alhacen on Refraction (Volume 7).